Discover new dishes of the menu with French and Korean cuisines in the comfort of this restaurant. Pierre Sang on Gambey offers you good daurade, amuse bouches and ox. Do not leave without trying tasty parfait, gâteau and mango dessert. This place is known for delicious port wine, cordial or champagne. This place offers great ice tea, red tea or coffee among its drinks.

This spot is famous for its great service and friendly staff, that is always ready to help you. Here you will pay fair prices. This restaurant can be characterized by the fancy decor inside. Pierre Sang on Gambey is a Michelin selection and it has been awarded 1 black knife-and-fork symbol: according to the inspectors' opinion, this place retains quite cosy atmosphere.

Ratings of Pierre Sang on Gambey

5 months ago on Google
The interior is cosy and intimate. The food is very incentive and I love how you have to guess what you are. The dining experience is superb. We even saw the ex president of France on the night we dined here

6 months ago on Google
On my last night in Paris, a Sunday when many restaurants are closed until Tuesday, I chose to dine at Pierre Sang's flagship restaurant fittingly named "Signature." This was an absolute fabulous dinner in a small, chic space, not much bigger than the open kitchen.Our server Anatole, was professional and informative, handling dozens of my questions with aplomb. Signature does not have a Michelin star. Certainly, an utter surprise, since the food and service were Michelin quality, and well respected critics in Paris have showered Signature with praise. It may be because the kitchen is run by a rotating team of chefs, something Michelin doesn't like. Favoritism is shown to chef driven restaurants and kitchens. Michelin does what Michelin wants. However, don't allow the lack of a Michelin star to deter you from visiting Signature. Our dinner was scrumptious.Pierre Sang owns and has mastery over three restaurants within shouting distance of each other in the northern reaches of the Eleventh Arrondissement, not far from the nightlife on Oberkampf. The two other casual joints are very popular with the denizens who enjoy the bars and clubs in this neighborhood. Signature is a destination restaurant, very different from the other twoOur 6 course set dinner was complex, innovative, and so difficult to describe. It was right up there with one of my best meals in Paris. The room holds about ten tables and personal attention is assured. The price of 69 Euro, was rather reasonable for this amazing food. There are two sittings I believe, 7:00 and 9:00, but that may be wrong. Have dinner here on a Thursday, Friday or Saturday and then hit the nightlife of the 11th and 20th a few steps away. I think that would be a perfect evening.

2 years ago on Yelp
Fun dinner at Pierre Sang on Gambey. Note, there are two locations. We wanted the more intimate experience. We sat at the chef's table and enjoyed watching the team in action. Pierre Sang was a finalist on French Top Chef and is listed on Michelin plate. My husband made reservations weeks before our holiday to Paris. He was pretty proud of himself for planning this surprise. It was a fun dinner because they do not give you a menu. You do not know the ingredients or dish coming your way. The food is served and you guess all the ingredients, herbs, sauces etc. I guess fun for foodies and maybe not for some. We thought the price point was a steal for a 5 course Michelin dinner.  Husband liked the wines paired a lot. The chef was super accommodating to my pregnancy and checked on me every dish.   We especially enjoyed the fish course and the beautiful fig dessert. 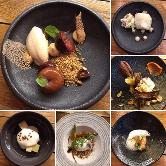 Paris: romance in every bite
by Nova Vozrak