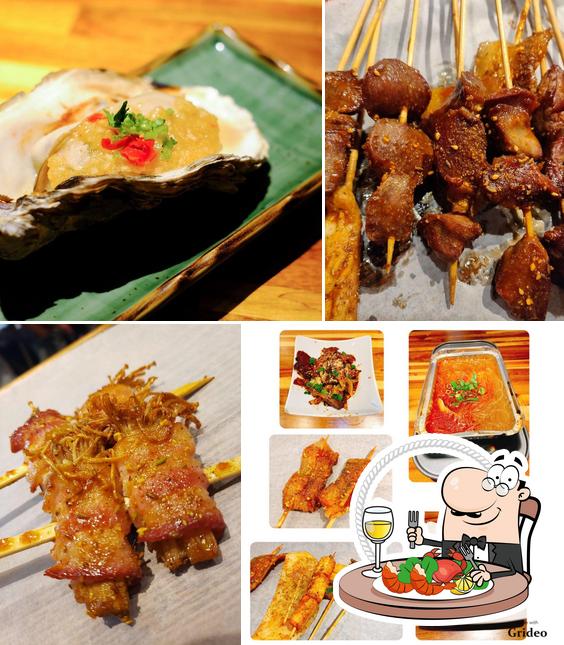 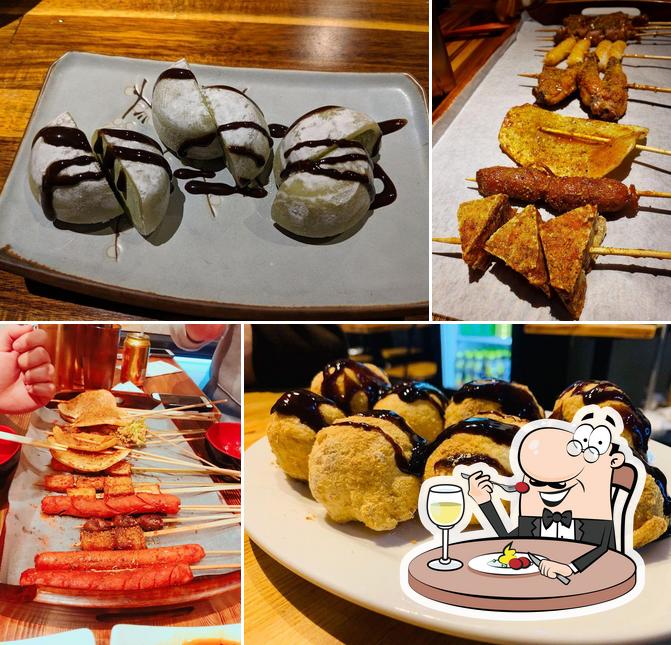 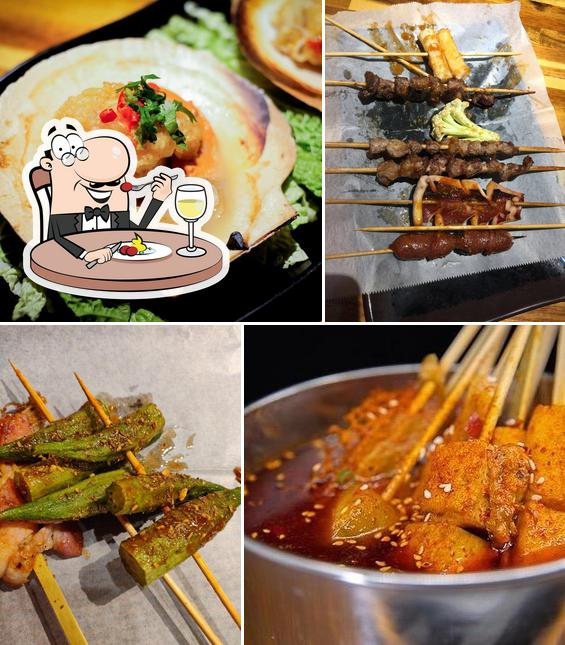 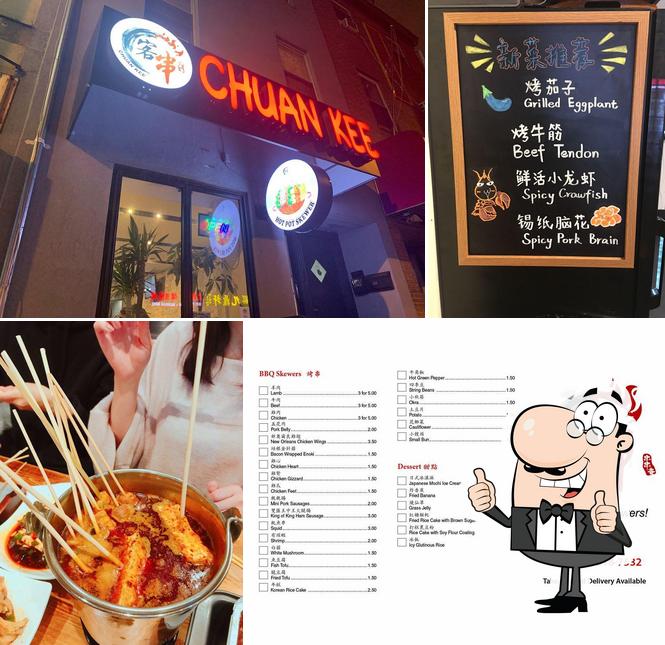 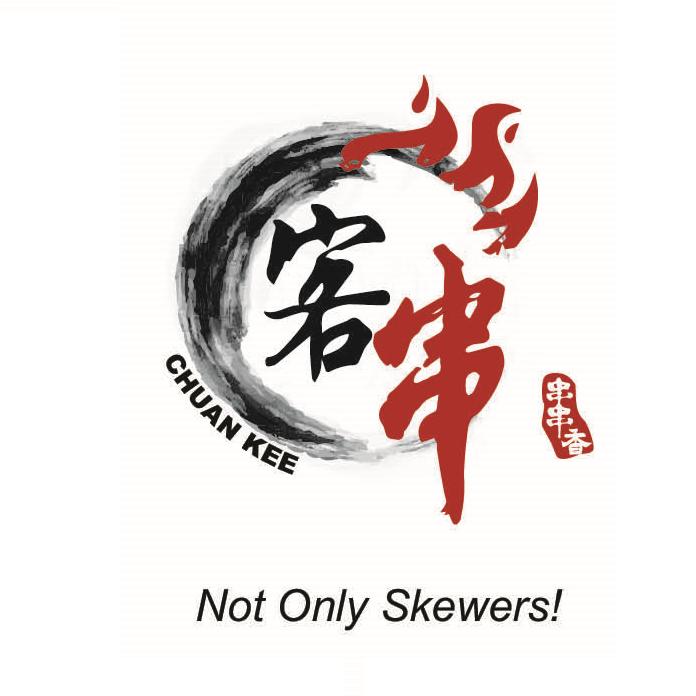 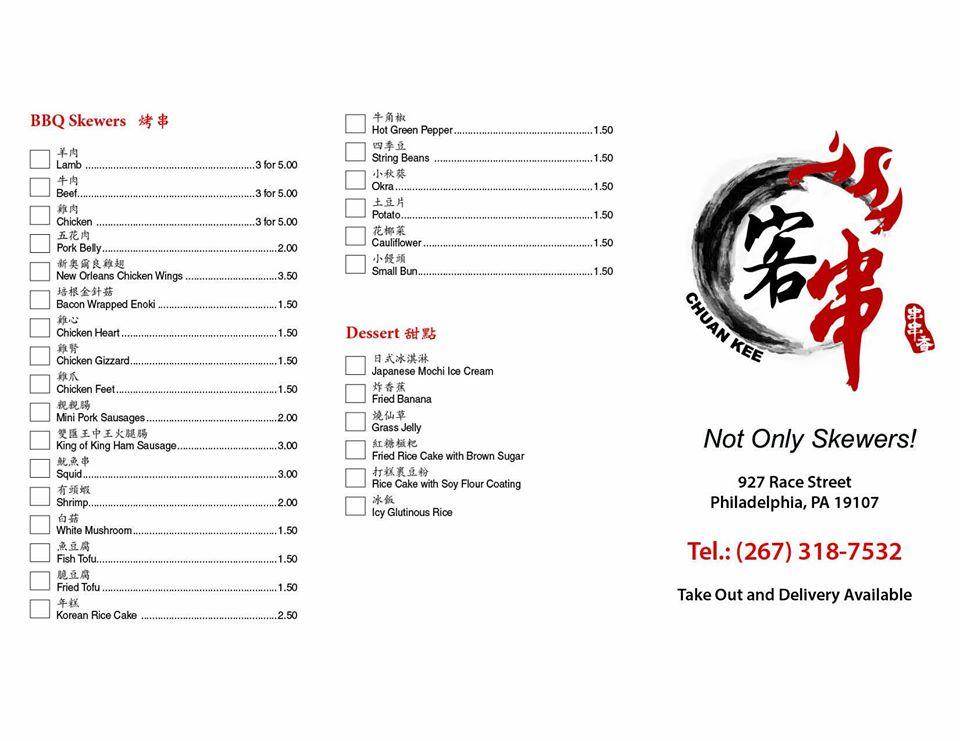 If you appear to be near China Town, you can visit this bbq. Chinese dishes are on the menu at Chuan Kee. This place offers nicely cooked chicken wings, bacon and soft-shell crabs. It's time to degustate great tea.

This spot with takeout dishes is suitable for those guests who like to have lunch on the go. The positive aspect of this bbq is that the staff is hospitable. Fast service is something visitors appreciate here. You may be surprised by affordable prices at Chuan Kee. As people find it, the atmosphere is cool here. This place has got Google 4.4 according to the guests' opinions.

a year ago on Yelp Request content removal
I legitimately could not suggest a better spot for skewers and Hot Pot (and for just genuinely great staff). The food was mind blowingly delicious (just check out the pics) and all of the folks who worked there couldn't have been sweeter. Seriously, do not sleep on this restaurant

a year ago on Yelp Request content removal
I am just so glad I found this gem of a restaurant. The service was great, and the food was AMAZING. We were just savoring ever bit of the flavors. We got skewers and a spicy mala hot pot. Soup was absolutely delicious, too! I honestly wish I could say more without sounding like I'm advertising this place but here are my very honest 2 cents if you're wondering if you should pay this place a visit.

a year ago on Yelp Request content removal
I don't normally complain about wait times or what order my food comes in, but I ordered four skewers and sweet potato fries as an appetizer. I got one skewer around 35 minutes after ordering, two more around 40 minutes after, and then the last skewer and my "appetizer" almost 50 minutes after I ordered! And this was around 8PM on a weeknight, the restaurant was not busy, but there was a table of four already seated and a couple takeout/delivery orders so it's not like they had to restart the grill for just me either. If you take out the grill start time, I've gotten faster food even from backyard barbecues! And I wouldn't have even minded a similar wait time if I'd gotten my appetizer first and then had all my skewers come out together, but no, food came out slow and completely haphazardly. On top of that, what sounded like, I don't know, rapid random morse code beeping was carrying over their speaker system, so it was all around a bad dine in experience. The skewers might seem decently priced at a couple bucks but the portions are minuscule! The bacon wrapped enoki skewer amounted to one strip of bacon and less than a quarter of a package of mushrooms, which is probably something like 20 cents worth of ingredients. Yeah, I know restaurants have labor and rent costs, but come on, four measly rice sticks $1.50? Chuan Kee is the first restaurant where I've spent over $15 and left hungry, and that was with the sweet potato fries doing all the heavy lifting. The food itself tasted okay (although they used the same sweet and spicy sauce on everything I ordered, so not much variety) except the lamb skewer, which was incredibly tough and gamey and one of the worst things I've ever had, which took what was an otherwise 2.5* meal down to a 1.
All opinions
Get directions
Address
Jefferson
927 Race St, Philadelphia, Pennsylvania, USA
Features
Delivery Takeaway No outdoor seating
Opening hours

Best vegetarian restaurants to dine in Philadelphia
by Miles Greene