After a long walk around Stigter van Doesburg, go to this restaurant and have a rest here. Clients state that they like Italian cuisine here. Do not leave without trying nicely cooked ravioli, spaghetti carbonara and antipasto salads. The cooks here prepare tasty tiramisu, nutella pizza and panna cotta. Get your meal started with good Merlot or delicious beer. When visiting La Festa, it's a must to try great coffee.

The warm atmosphere of this place makes customers feel relaxed and have a good time. Most visitors indicate that the staff is courteous. Service at this spot is something one can call fabulous. Prices are found adequate here. With the homey decor, guests may feel at home there. Google users like this restaurant: it was rated 4.5 stars.

a month ago on Google
Ordered pick up on a Friday because of the snow. Was the freshest pizza I have ever tasted! Dough was light soft and crispy and it wasn't salty like most pizzas I've had in the past. Ready in ten minutes as promised and was piping hot. I was skeptical that these 9 euro pizzas during a pandemic would have close to zero toppings but to my surprise it was covered in huge slices of ham, lots of pepperoni and cheese. Will be ordering again!

2 months ago on Google
So gorgeous

2 years ago on Yelp
Last dinner in Amsterdam, and we went out with a bang. We decided to check out Ristorante La Festa because it was just a few doors down from the apartment we were staying in.  After seeing its awesome Yelp reviews, we decided to dine here on our last night, as we wanted something close by and easy.   We walked in and were able to get seated immediately.  There were only a few parties inside on a Saturday night, an hour before closing.  Our server was super friendly, personable and helpful.  He told us that the special pizza of the night had burrata and that there were only two pizzas left; if he sells all of the pizzas at the end of the night, his boss will buy him a bottle of whiskey.  We had to help the guy out!  Plus, burrata is amazing, so how can you resist?  We also decided to order the vegetarian antipasta platter with our wines. The food was awesome and so deliciously fresh.  The vegetarian antipasta platter came out first, and all of the different assorted items were mixed throughout in an olive oil base with pesto.  There were chunks of mozzarella cheese, artichoke hearts, tomatoes, bleu cheese, cucumbers and arugula.  It was better than expected and a great way to start our meal.  The pizza then came out and it was delicious!  The burrata, as it should be, was the star of the pizza, with its big lump right in the middle.  All of us were able to get a chunk of burrata with every slice.  For the three of us, the pizza was the perfect portion for sharing.  (And our server did end up selling out all the pizza specials, so won his whiskey!)  After our meal we were provided complimentary limoncello, which was the perfect night cap. I will say, I'm not a huge Italian food fan, but Ristorante La Festa makes me think otherwise.  This was a great dinner in Amsterdam, and who knew you could find awesome Italian food in the Netherlands?  The place also feels very home-like, with its small space, dim lighting and far distance from the tourist scene.  I'm already missing Ristorante La Festa and Amsterdam. 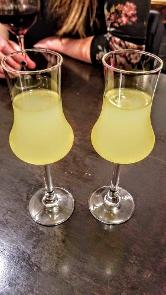