Montreal, Canada, is located on an island that is five times larger than Manhattan. It's the most populous city in the Quebec province, the second-populous Canadian city after Toronto and the second-largest French-speaking city after Paris. Most Montrealers are bilingual, they speak both English and French.

Fortress Ville-Marie ("City of Marie" in reference to the Blessed Virgin Mary) was established by French settlers in 1642. The settlement was built around the three-peaked hill Mount Royal whose contraction gave birth to the name of this city. It is interesting that even nowadays, buildings can't be taller than the cross on the mountain.

Historically, Montreal was the financial capital of Canada till the 1970s when Toronto surpassed its economic potential. Still, this city is a leading centre in a number of fields, including video games, aerospace, cybersecurity, transport, artificial intelligence and food processing. This unique place boasts the highest number of restaurants per capita throughout the whole Canada. The menu is so divergent and cosmopolitan! The traditional Quebec food is highly influenced by 16th-century French cuisine. Read this food guide and find out the best restaurants where you can try classic Canadian dishes in Montreal. 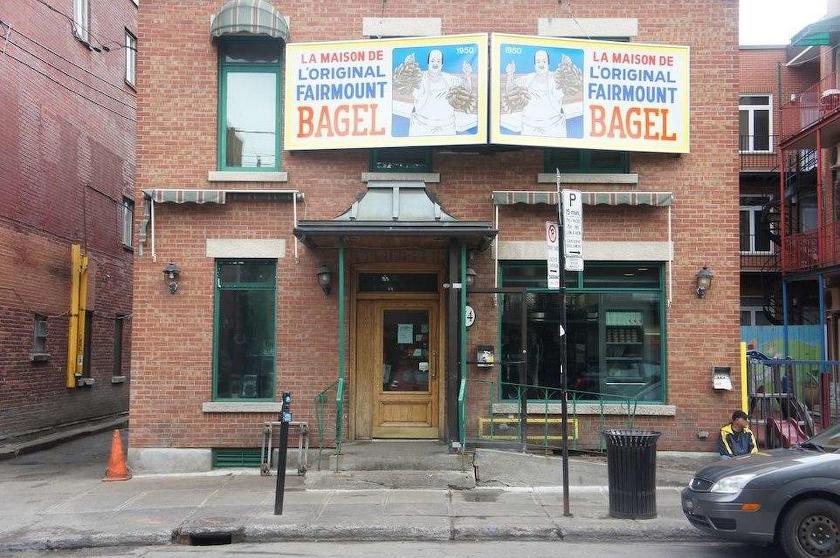 This dish is a variety of wood-fired baked bagels. They are small, sweet and dense with a large hole in the middle. The main rule of its preparation sounds like that: it is always baked in a wood-fired oven. This dessert was brought by Jewish immigrants from Poland and, thus, each of the variants you may come across reflects a certain area in the home country.

You can encounter a broad variety of bagel recipes all over the world, however, this Montreal speciality is smaller and denser and it comes with a larger hole.  Also, this dish is exceptionally chewy, soft and delicious. The secret is simple: Montreal-style bagels are poached in honey water, topped with sesame or poppy seeds and then they are baked in a wood-fired oven. Jewish immigrants from Poland brought bagels to Montreal at the beginning of the 20th century, there's some controversy concerning the names of who was the first to introduce this dish to Quebec. In one interpretation, Isadore Shlafman and Jacob Drapkin are considered fathers of Montreal-style bagels. They established the Fairmount Bagel bakery in 1949 and this legendary place is still open for visitors.

Montreal smoked beef is a deli meat made by salting and curing a selected beef brisket with spices. Using a classic Canadian recipe, the beef is hot smoked and then steamed. The dish is usually served on a rye bread sandwich with yellow mustard.

Montreal-style smoked meat has been popular with locals since the 19th century. It was Jewish immigrants from Eastern Europe who brought this dish to Montreal. The dish is cooked from beef brisket that is cured, smoked, steamed and then sliced before serving. It resembles New York pastrami a bit, but the Montreal version is seasoned with more peppercorns, mustard seeds, garlic and coriander. You can try magnificent smoked meat in the oldest deli in Canada - at Schwartz's. This restaurant has been serving the best smoked meat for over 90 years. It consists of French fries and cheese curds with light brown gravy on the top. This is a fast-food dish usually offered in small diners, pubs, roadside chip wagons and hockey arenas. It originated in rural Quebec in late 1950s.

This dish originated in the Centre-du-Québec region in the late 1950s, at first, poutine was served only in "greasy spoon" diners or was used to feed the staff of restaurants. However, nowadays this food has become the emblem of the Quebec province. The name of the dish is derived from the word pudding. The essentials of poutine are French fries, cheese curds and brown gravy. It's a must to visit the La Banquise restaurant that was the very first place to serve poutine in Montreal in the 1970s.

4. Grilled chicken of your dream Grilled Chicken is a very popular dish made with chicken. It can be served with a wide variety of side dishes, including salads, roasted or baked vegetables, mashed potatos, or sugar snap peas.

Rotisserie or grilled chicken is another blockbuster hit in Montreal. Boneless chicken breasts get marinated with garlic and herbs and then tossed on the grill. It's traditionally eaten with fresh snow peas, roasted sweet potatoes or grilled vegetables. The dish is usually drizzled with a bit of honey so it's especially tasty.  Order just perfect grilled chicken at the Chalet Bar-B-Q restaurant. 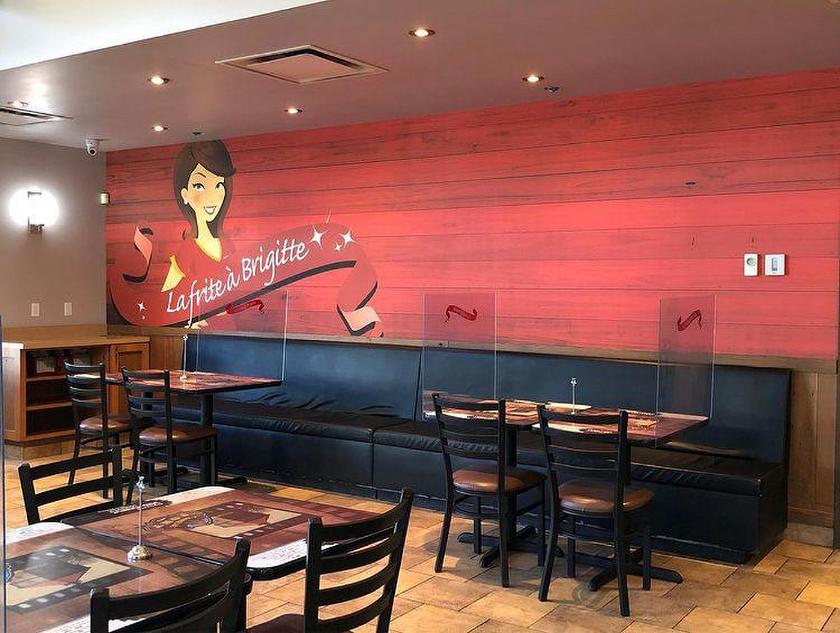 A hot dog or sausage in a loaf - this dish is the embodiment of simplicity. Therefore, probably, it has become so popular all over the world. And although it is not particularly refined, it is prepared in various parts of our planet. The history of hot dog originates back in the Middle Ages: it is believed that the first sausages appeared in Frankfurt in 1487. However, the turning point in the "career" of hot dogs is associated with mass emigration from Europe to the US at the end of the XIX century.

Montreal has an authentic hot dog culture. Steamies, or Montreal hot dogs, are quite small and cost about $1-2. Hot dogs are placed into the steamer and cooked for several minutes, then they get topped with mustard, onions, cabbage and fresh coleslaw. Also, you can try supreme hot dogs with cheese and bacon as well as Michigan hot dogs with spaghetti or meat chilli sauce. Come to the famous Frite A Brigitte restaurant and enjoy delicious steamed hot dogs.

6. Pizzaghetti - a mix of your favourite dishes

This dish is a highly original combination of our favourite dishes, it appeared in Quebec and it is very popular now. You can try two versions of pizzaghetti: pizza can be sliced in halves and come with pasta and tomato sauce on the side, or you can find spaghetti under the melted cheese on the pizza. Strange and tasty! 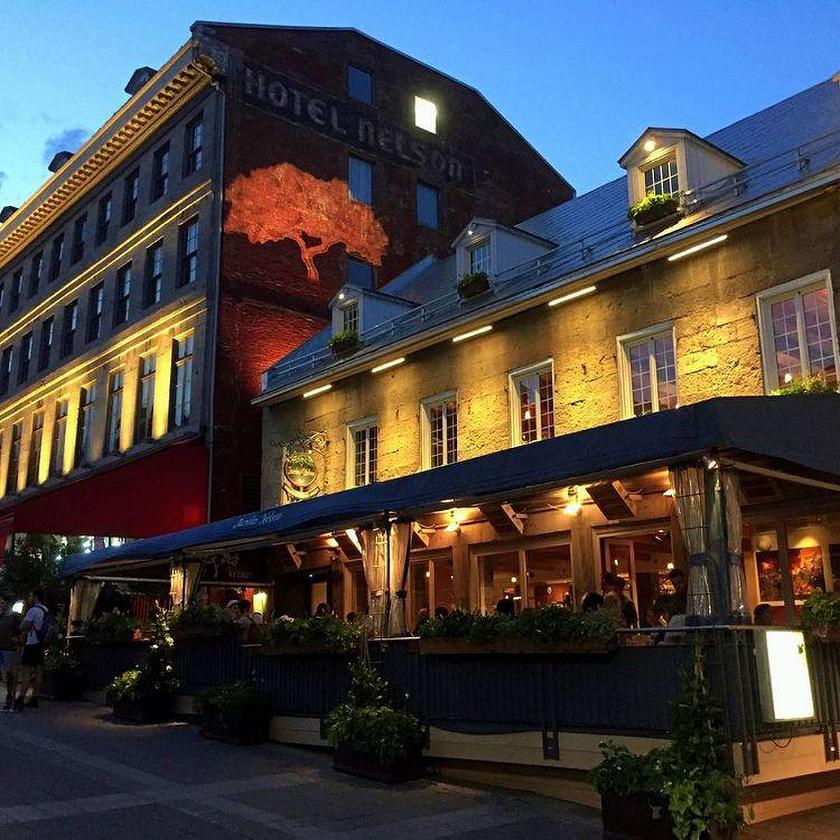 This dish was called ‘a pudding for the poor’. It was created in Quebec by factory workers in 1929 during the time of depression. Mix flour, water, brown sugar and other not so expensive ingredients - and the cake is ready. In the 21st century, a creamy sauce made from the maple syrup is also added.

This dessert is a traditional recipe from Montreal, the dish was introduced by female factory workers during the Great Depression in 1929 and it's also known as the poor man's pudding. In fact, it's a maple pudding: a basic cake is poured with hot maple syrup, brown sugar or caramel and the liquid creates a distinct layer while baking. One of the greatest pouding chomeur is served at the Jardin Nelson restaurant. 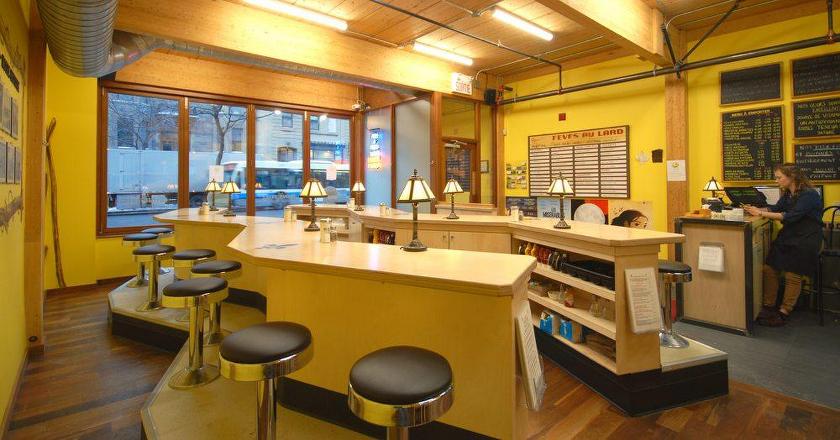 This is a meat pie that is a part of Christmas and New Year meals in Quebec (where it originated) and is sold all year long in Canada. It is made with minced pork, veal or beef and even fish in coastal areas of Canada. It is also a traditional French-Canadian dish.

This double-crusted meat pie is made from ground pork, onions, vegetables, spices and herbs. Tourtière can be a shallow or many-layered pie. The dish is traditionally cooked on Christmas Eve, it is a vital part of the traditional Catholic feast réveillon. Choose Binerie if you want to try this authentic French-Canadian pie. 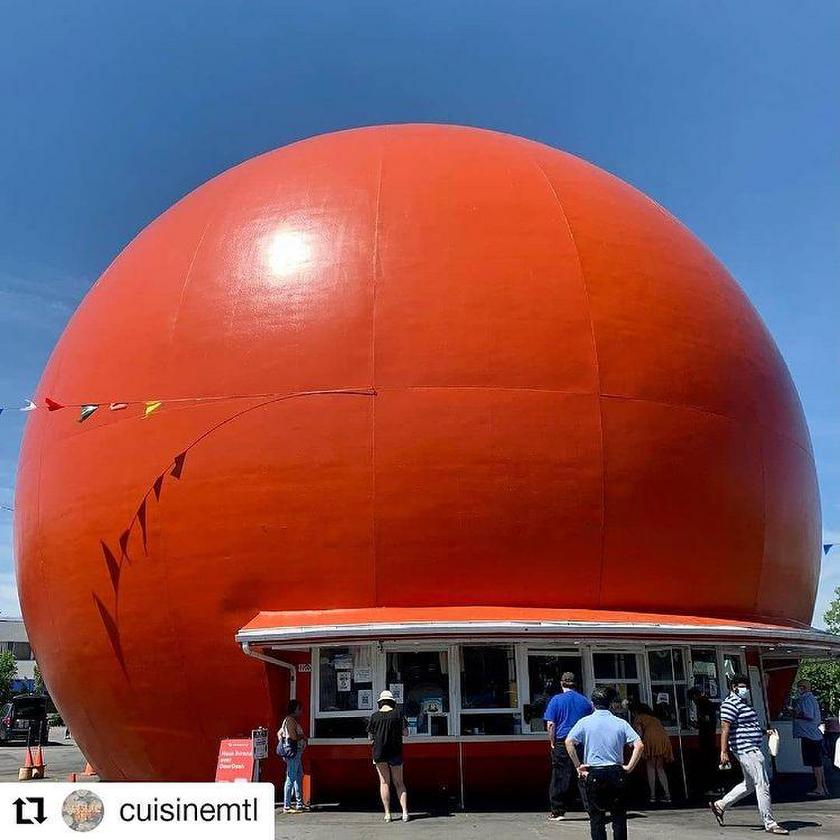 The Gibeau Orange Julep restaurant is a must-stop whenever you take a ride on the Decarie expressway. It's a worldwide famous roadside attraction and fast food restaurant in the shape of a gigantic orange. The restaurant is also known as OJ or The Big Orange. It was founded by Hermas Gibeauin 1932 to sell his trademark drink based on a family recipe. Earlier, rollerskating waitresses served guests, but today you order and get your food at the counter. The most famous Montreal drink here is cooked from orange juice, milk, water, sugar, vanilla extract and ice cubes. It's so incredible! 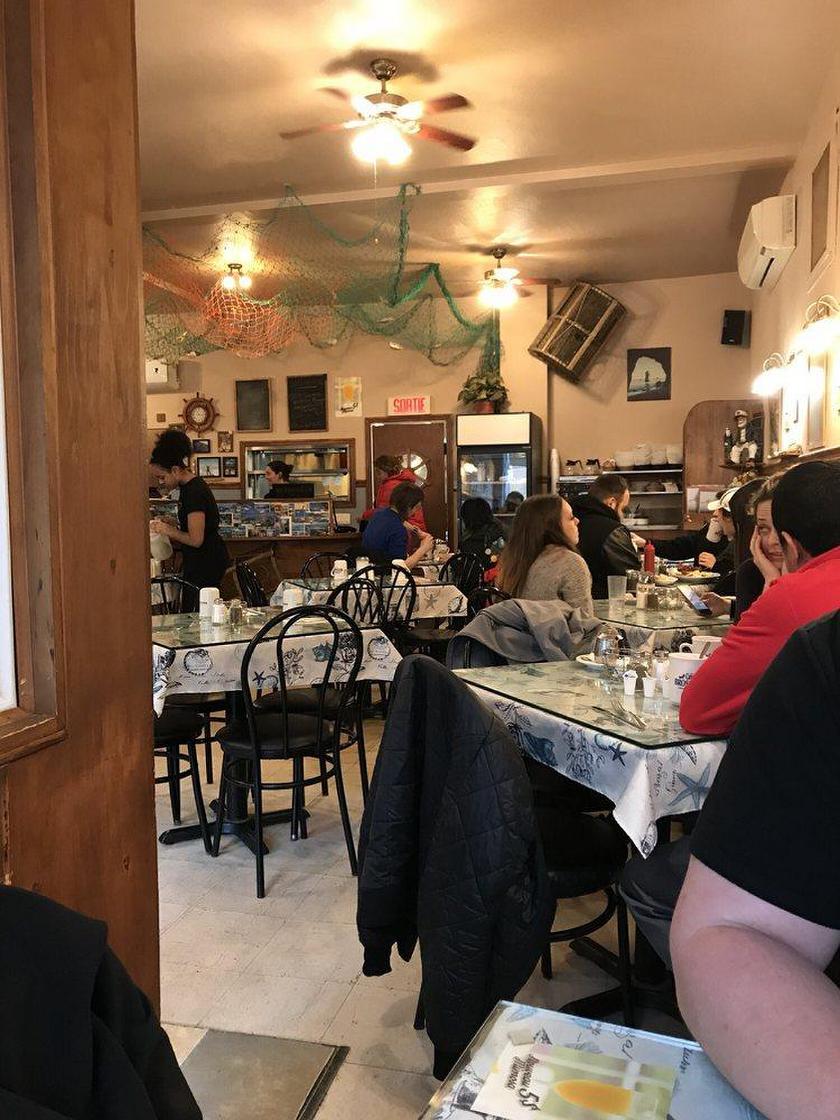 This dish is one of the ingredients of the traditional Quebec breakfast. Creatons can be found on any restaurant menu. In fact, the dish is really simple, it consists of one single ingredient - minced pork, which is boiled in milk.

Cretons (gortons or cortons) are a pâte-like dish that is very popular among French Canadians. The dish is cooked from breadcrumbs, ground pork and pork fat boiled in milk or water and seasoned with onions and spices. Cretons are traditionally served on toasts or plain multigrain bread and they are an important part of iconic Montreal breakfast. Have a great breakfast at the nice lovely restaurant Chez Jacquie et France.

Comments on 10 typical Quebec dishes to try in Montreal, Canada

Add your comment on
10 typical Quebec dishes to try in Montreal, Canada

Restaurants with desserts
1 760 restaurants
See all