The 10 nicest dishes in Kyiv, Ukraine

One of the oldest cities in Eastern Europe, Kyiv, or Kiev, has survived Norse dominance, eastern hordes, and the foundation of Kievan Rus', the first East Slavic state, even becoming its capital. Nowadays, locked in a never-ending argument for cultural superiority with Russia, Ukraine is a country rich in tradition and cultural diversity, and Kyiv is the foreground of national self-expression. nowhere is the new and ever-changing face of the Ukrainian identity more pronounced than in its food.

1. Get a greeting with korovai 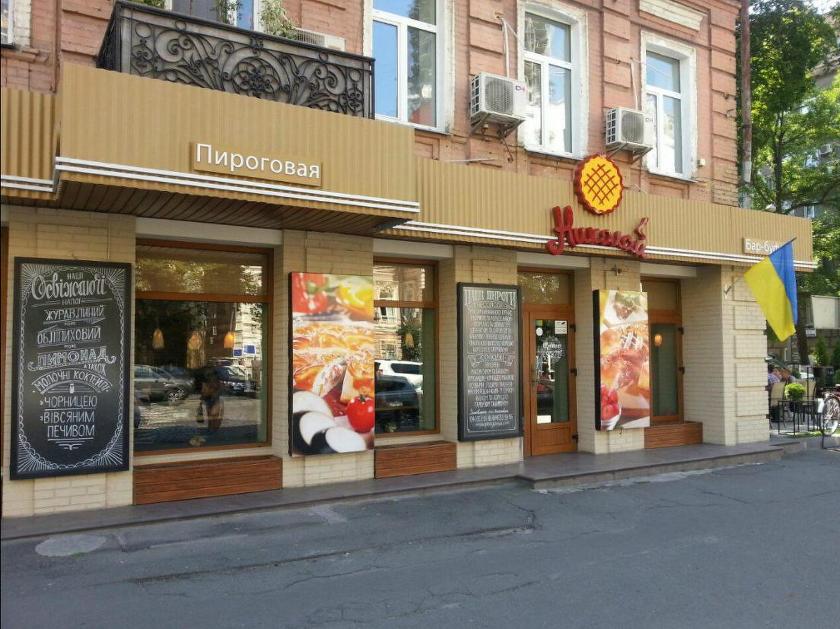 Korovai is a round sweet yeast bread. Wedding korovai is decorated with complex knife patterns and branches of the trees, it has always been a symbol of love.

It's an old Slavic tradition to greet guests and visitors with bread. It's an old sign of goodwill and manners. Naturally, different dishes and recipes have spawned to make food for every occasion. Korovai is one of the most important and official types of bread and has remained part of the wedding tradition in many Eastern European countries. It's a large round braided bread, traditionally baked from wheat flour and decorated with symbolic flags and figurines. Every decoration used to be symbolic, which only adds to the mystique and exotic feel of the dish, even if you just want to eat.

Great Ukrainian korovai can be found at Nikolay.

2. Keep it light with pampushkas 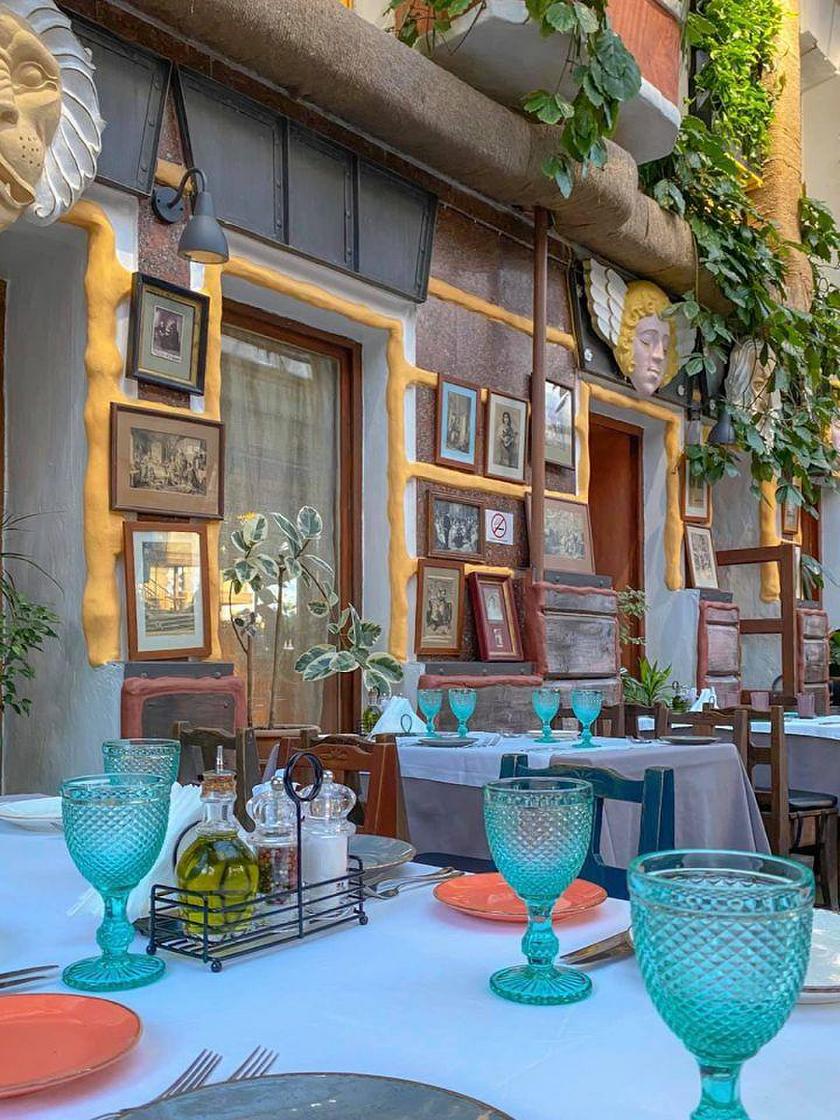 They are small yeast-raised dough rolls with a savoury or sweet flavour. Pampushkas don't usually have any filling. They are baked, fried and steeped with garlic sauce. These tasty buns are a great accompaniment to borsch.

After getting a proper pastry welcome, we shall keep it up with something absolutely unavoidable when discussing Ukrainian cuisine. Pampushkas are as tasty as their name is cute. A typical pampushka is a small savory or sweet yeast-raised bun or doughnut. The name "pampushka" is actually suspiciously similar to "pancake", but they are rather different in that pampushkas are usually seasoned with garlic sauce and often served as a side dish with red borscht or yushka. Potato pancakes are cooked from ground or grated potatoes, flour, eggs and spices. They taste like draniki. They can be used as an independent dish, or as a side dish to meat. Pancakes can be topped with sour cream or cottage cheese. It's a very popular dish in Southeast Europe.

After the introduction of Potatoes to European agriculture, almost every country has invented its own potato-based dish that is truly characteristic of local cuisine. Ukraine is no exception with their potato pancakes called "deruny". They are usually made from grated or ground potato, matzo meal, or flour and a binding ingredient such as egg or applesauce often flavored with grated garlic or onion and seasoning. Some variations may be made with sweet potatoes, roquettes, and mashed potatoes.

4. Go up with Chicken Kiev 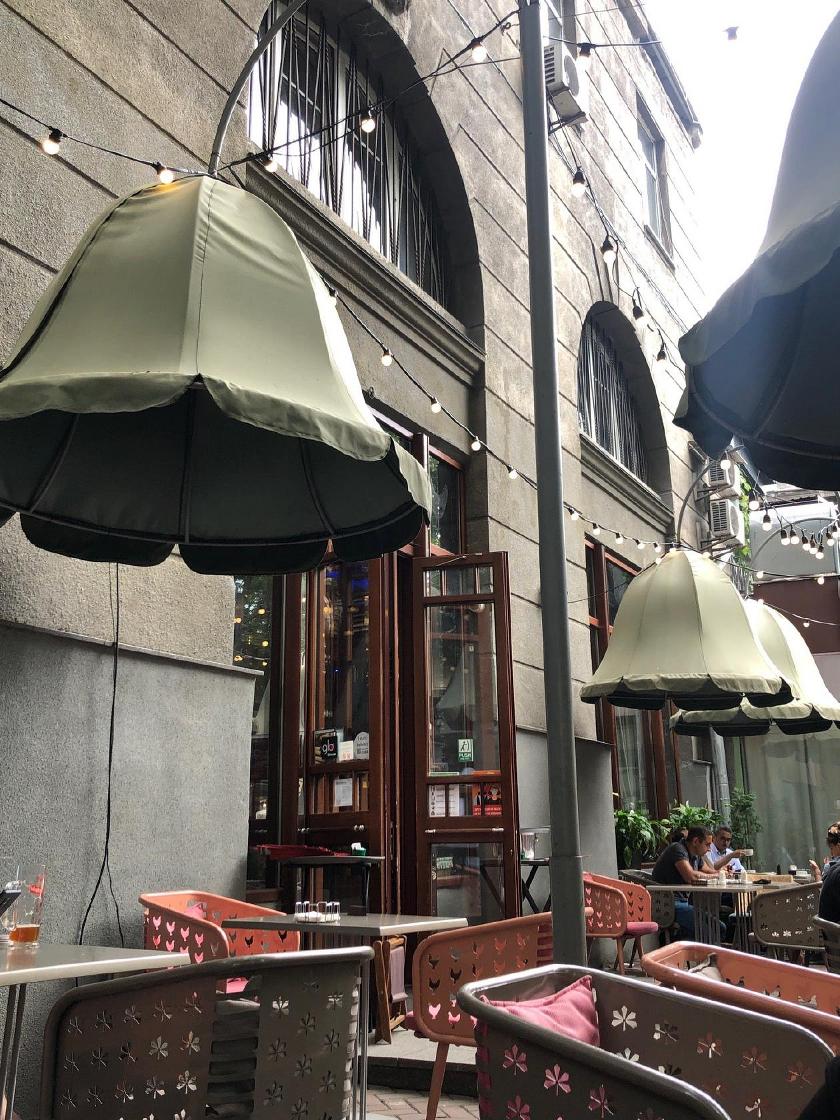 It's a traditional Ukrainian dish, a crumbed and fried chicken fillet that is stuffed with melting garlic butter. Chicken Kiev is also known as suprême de volaille à la Kiev and this dish is very popular in the Post-Soviet countries.

Exploring Ukrainian food without trying the one dish named after the country's capital would be irrational. Chicken Kiev, or cutlet Kyiv-style, is a dish made of chicken fillet pounded and rolled around cold butter, then coated with eggs and bread crumbs, and either fried or baked. After many changes and modifications over several centuries, the modern Chicken Kiev is made from a boned and skinned breast which is cut lengthwise, pounded, and stuffed with butter.

Following rather simple logic, you can always find good Chicken Kiev and drinks to come with it at Chiken Kyiv. 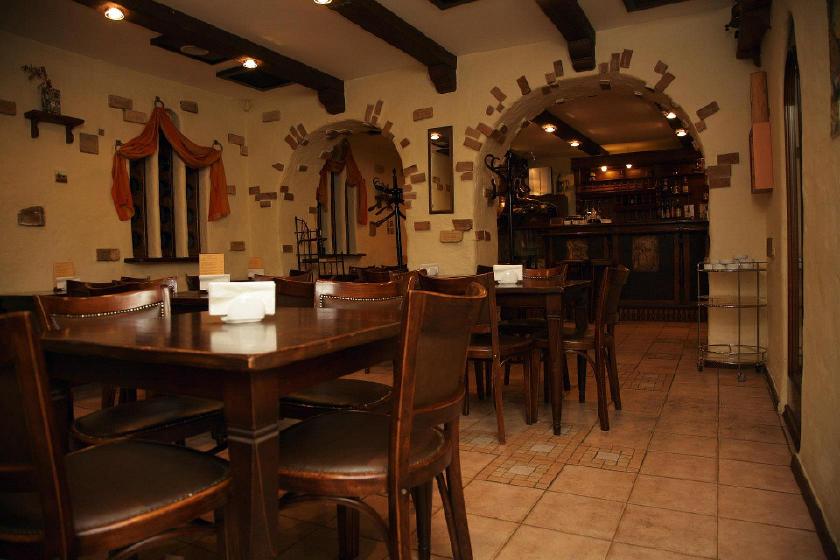 Everyone who has visited the Czech Republic, Poland or Germany and joined the sacraments of local cuisine will gladly remember the goulash. Goulash is a stewed juicy meat in a thick spicy sauce, served with dumplings and beer.

Ukraine is in the smack dab of old trade routes and has been a hub of cultural exchange since times immemorial. Therefore, many local dishes became popular across the European continent, and in turn, things like Hungarian goulash found their way into the cookbooks of Ukrainian households. The adapted "guliash" is a soup or stew of meat and vegetables seasoned with a variety of herbs and spices. The most important classic ingredient is paprika, but today, a lot of alternatives are available.

On a side note, one of the most amusing things about Kyiv restaurants is their naming. Here, we have Pantagruel with a reference to a classic French book about gluttonous giants. Goulash is great there, naturally.

6. Get a bite of kielbasa 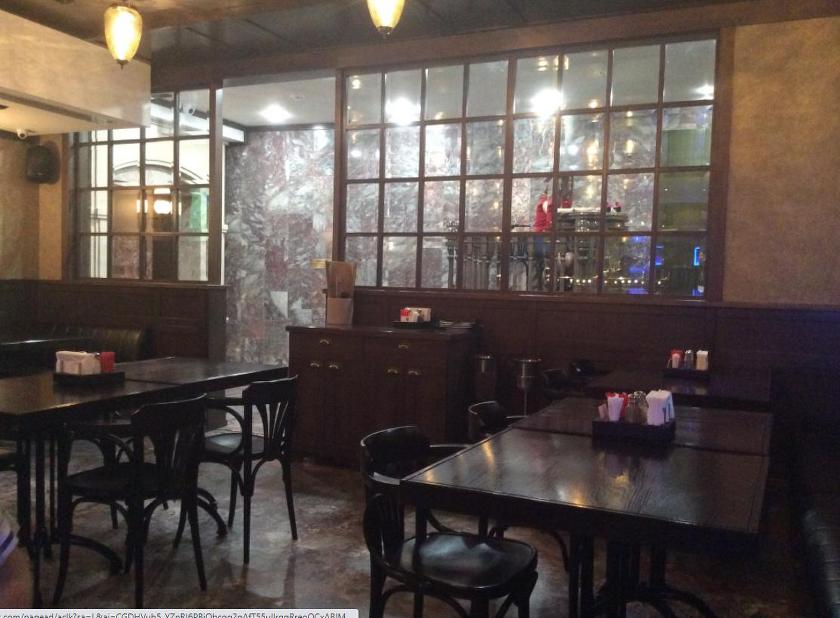 Sausages in a natural shell, made of pork and beef, with the addition of black pepper and nutmeg.

Sausages are naturally abundant in Ukrainian cuisine since the land has always been considered the main producer of pork in the region. Traditional Slavic sausages have the name "kielbasa" and come in different shapes, sizes, and with different contents. Ukrainian kielbasa, usually called "kovbasa" phonetically, consists of various kinds of smoked or boiled pork, beef, or chicken sausage. Every traditional household probably has a custom recipe for making home-style kovbasa, and finding a restaurant that uses recipes like that is a must for any guest.

It's worth noting that kielbasa is considered more of a snack than a meal in itself. Solomyanska Brewery has something to drink with or accompany their own kielbasa. 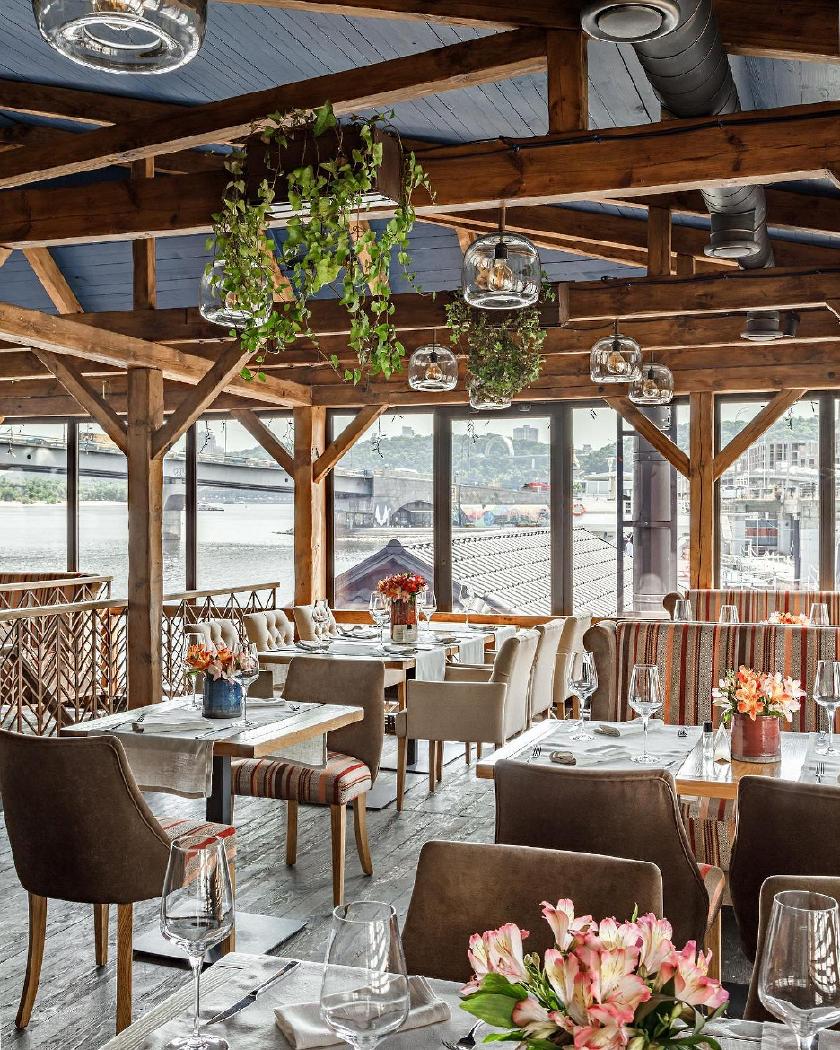 Borsch is a native Ukrainian and Polish dish. A distinctive feature of this soup is its color - red or dark red, it all depends on the beet, which is added there. Borsch is a very rich soup, its broth is brewed from beef meat, and then vegetables such as cabbage, carrots, onions, potatoes are added to it. Today there are many varieties of borsch, but, of course, this is one of the most favorite dishes in Russia and Moldova.

There's a centuries-old argument between different countries of Eastern Europe over who actually invented the dish called borsch. The name itself originated from using leaves and umbels of common hogweed used in the classic recipe which found its way across the globe. Sweet and sour borsch variations are very popular across Ukraine and in the restaurants of its neighbors. But only Ukrainians know the real secret - making borsch cannot be accomplished without being generous with every element.

8. Distinguish between dumplings and real dumplings

It is a broad range of dishes from all over the world. They are small balls of dough that is made with flour and water and wrapped around a filling. Fillings are so versatile, it can be any meat, fish, seafood, fruit, etc. Dumplings can be boiled, baked, steamed or fried.

It's widely known that Ukraine, Russia, and their neighbors have lots of different dumpling variations. The dough pieces without filling made by means of baking, boiling, frying, simmering or steaming are as common here as fish and chips in Britain. In Kyiv, the most common type of dumplings is "vareniky" consisting of potato, cheese, quark, sauerkraut, ground meat, mushrooms, or fruits served with inevitable sour cream. Dumplings have been immortalized in cinema and literature long before the modern restaurant scene came to be.

Still, you can find decent classic dumplings at places like Barvy.

9. Find a new perspective with khachapuri 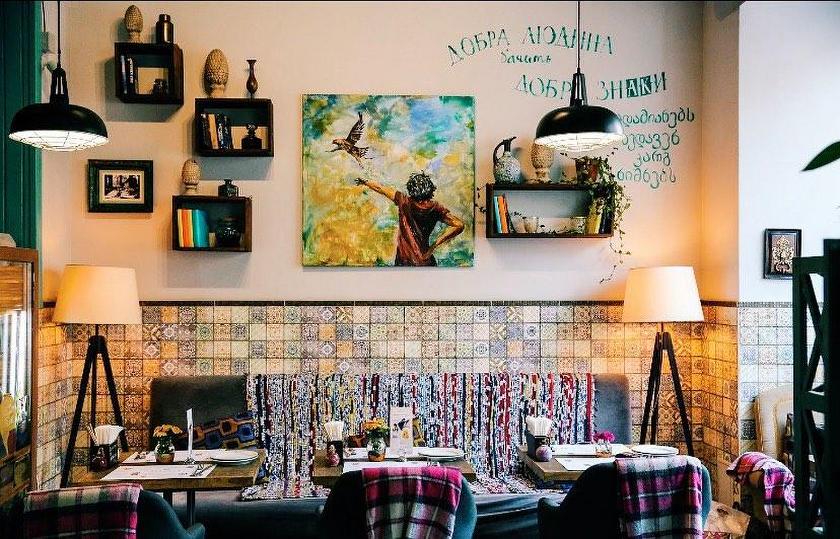 This dish is a vital part of the list of the intangible cultural heritage of Georgia. Khachapuri is fluffy bread stuffed with a mixture of cheese and it has a runny egg in the centre.

It may seem strange to explore the capital of Ukraine and try a traditional Georgian dish of cheese-filled bread while you're at it. But, surprisingly, the Ukrainian food scene benefits greatly from the popularity of Georgian and Azerbaijani dishes. Popular street food and a masterpiece of culinary skill if done right, khachapuri offers great and simple taste, simplicity, and a bit of an exotic feeling even when you're in the middle of a beautiful city like Kyiv. This goes to show how important cultural exchange is. 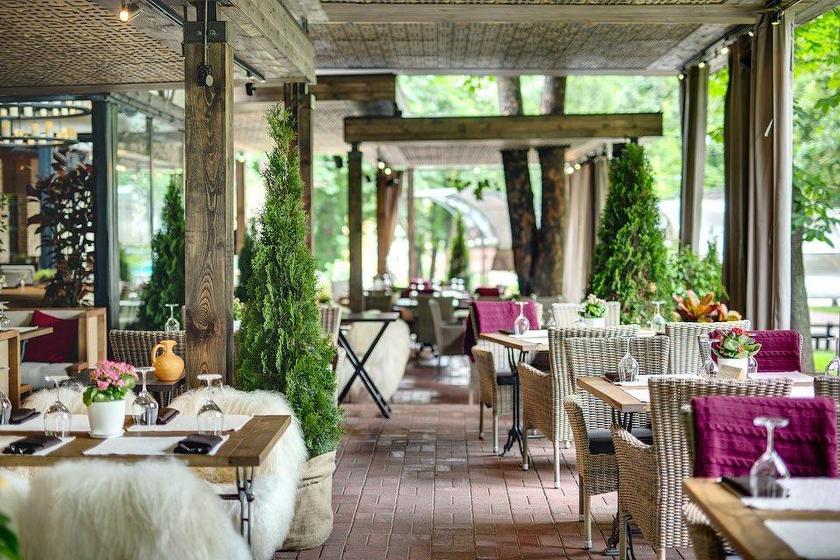 Okroshka is a cold soup made of mixed vegetables (raw cucumbers, boiled potatoes and eggs and sausage). The origin of the name might have come from the Russian word ‘крошить’ which means ‘to crumb’, i.e. to cut into small pieces. Then Russian people add some kvass and salt there.

To finish off the list, we'll do something amusing. Before we've looked at Ukrainian dishes that have been appropriated by other cultures, including Russian. Now we'll do something opposite - look at how Ukrainians perfect the recipe originating from the shores of Volga. Okroshka is a soup that is mostly cooked during the summer period with kvass or kefir, both of which are sour in taste. There's an old and rather humorous feud between proponents of either basic component. Other elements are sausages, cucumbers, greens, carrots, and radishes chopped in large pieces to make up the soup in all its nutritious glory. Naturally, Ukrainians know how to add them just right, so Ukrainian okroshka is something unique even compared to the classics.

Kyiv is a city with a strong sense of identity, but not one to shy away from adopting and celebrating worldwide cultural riches. This will make any explorer feel right at home. So good luck exploring Kyiv and its food scene.

Comments on The 10 nicest dishes in Kyiv, Ukraine

Add your comment on
The 10 nicest dishes in Kyiv, Ukraine