Top 10 dishes to die for in Palermo, Italy

There are few places in Europe as old and as dignified as the Sicilian capital Palermo. A place of long and distinguished history, a center of culture, and the birthplace of many social phenomena with even more myths surrounding them, this city has seen the youth of humanity. From Carthage and ancient Greece to Christiandom and modern democracies - Palermo has traces of all beneath its streets and on the facades of its buildings. The people of Palermo speak both Italian and their own language, their manners and mentality are extremely interesting, and, last but not the least, their cuisine is worth exploring, if only for the fact that it's Sicilian. 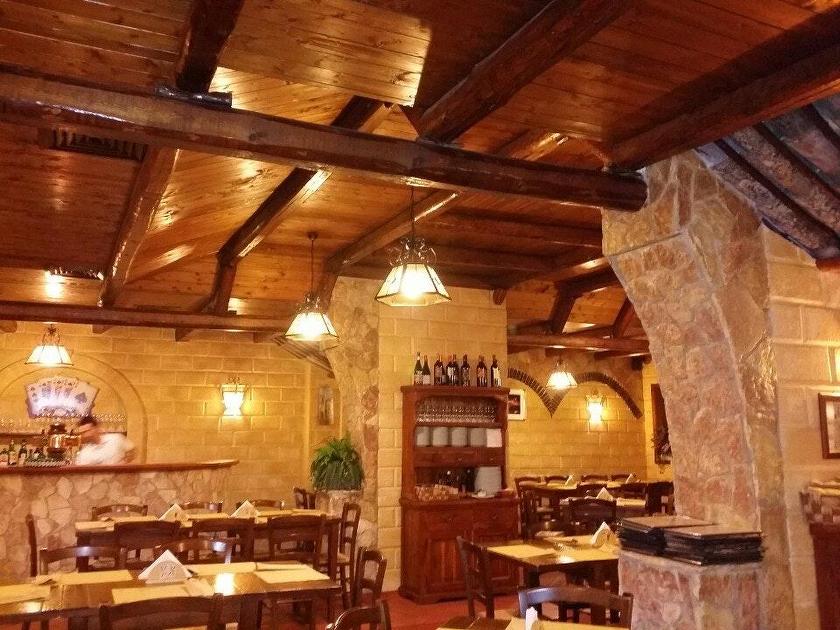 It's one of the most popular Italian dishes made of thinly sliced, floured and deep-fried eggplants. Parmigiana is layered with eggplants, cheese and tomato sauce and then baked in the oven. Try it with zucchini or artichokes instead of eggplants.

Let's kick off with a dish whose origin is being contested by different cities from all over Italy. Parmigiana is an old recipe, which makes it all the more enjoyable, yet its inventors will probably never be known. Like most Italian dishes, it's very nutritious. Parmigiana is made with fried, sliced eggplant layered with cheese and tomato sauce all combined in a rather pretty-looking combination and baked. Regional variations may have the sliced filling dipped in beaten eggs and dredged in flour or breadcrumbs before preparing the final oeuvre. Naturally, parmigiana goes well with cheese.

Il Baro is a decent place to start exploring food like that. 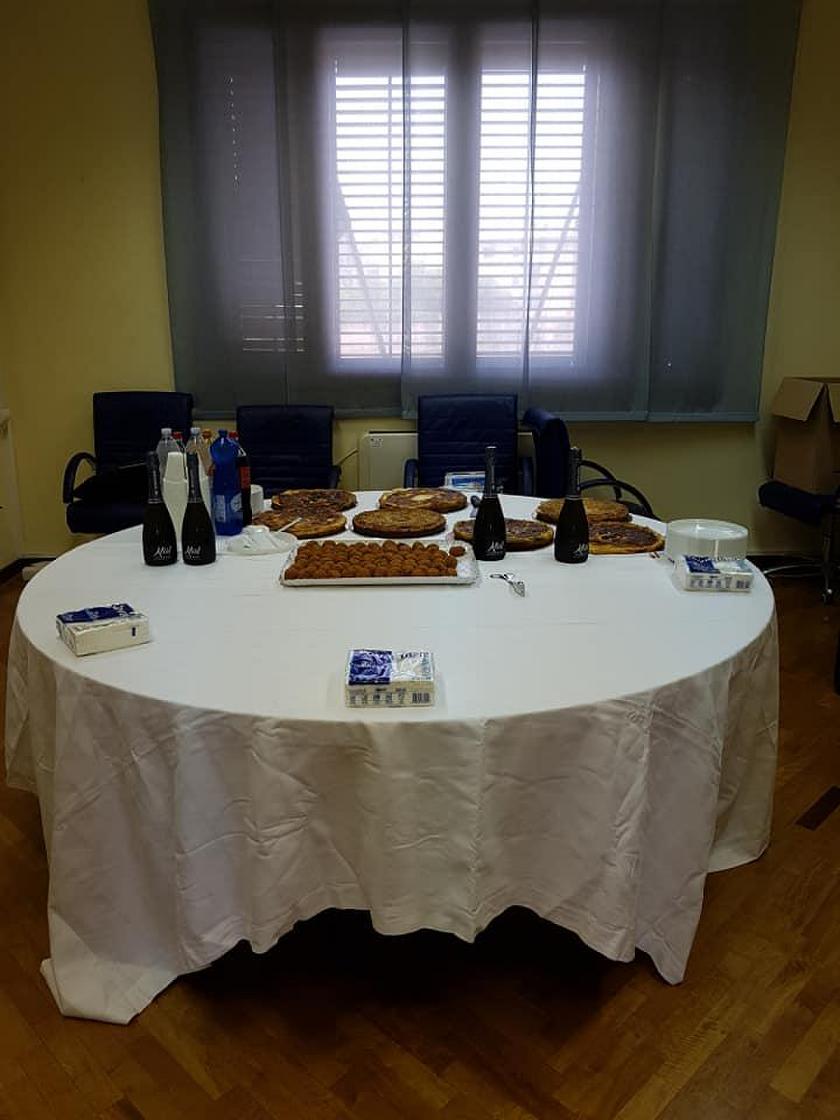 They are deep-fried rice balls stuffed with mince or meat, tomato sauce, cheese and spices and coated with bread crumbs. Arancini are traditional Sicilian food whose invention traces back to the Arab rule in the 10th century. The name means 'little orange' because of their color and shape.

We should probably go for something lighter next. Like arancini, for example. The name itself means "little oranges" and refers to the shape and color of these little rice balls. Yes, arancini are made from rice that gets stuffed, coated with bread crumbs, and then deep-fried. This dish is used by Sicilians during the time of feasting when bread and pasta are not eaten. In Sicilian cafes and restaurants, you are most likely to find "arancini al ragù" consisting of meat in a tomato sauce, rice, and mozzarella or other cheese.

Regardless of the type, it's best to look in places offering lighter food. Bat Marocco is a safe bet. 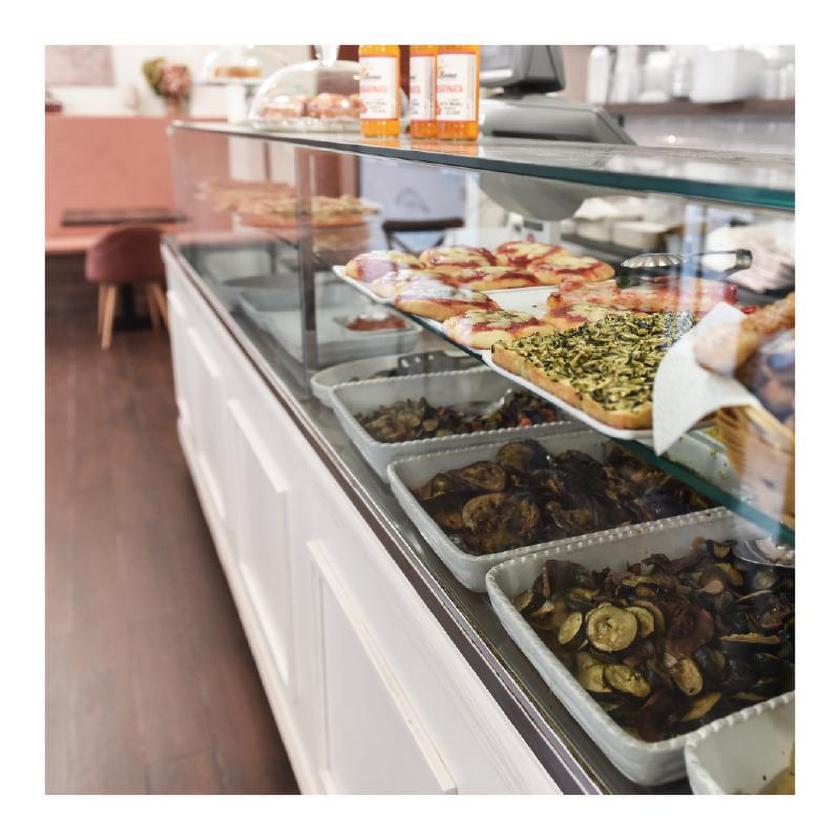 Biscotti, or cantucci, are popular Italian almond biscuits that are twice-baked and crunchy. They trace back to Ancient Rome when they were so popular among soldiers and travelers. Biscotti are made without eggs and fat and they can be stored for a long time.

Let's continue with the trend of things that are small but no less enjoyable than more substantial meals. Biscotti are almond biscuits baked twice to achieve their signature crunchiness. Due to being very dry, they are usually dipped in a drink, the most likely choice being Vin Santo. The origin of the name is Latin but the way people enjoy it is undoubtedly Italian, and the traditional recipe dates back to the nineteenth century. Looks like a perfect fit for a city with so much history. Biscotti are great as aperitifs or an addition to a dessert.

Try La Cucina Di Alu for some good biscotti in Palermo and keep in mind that a good drink is required to fully enjoy them. 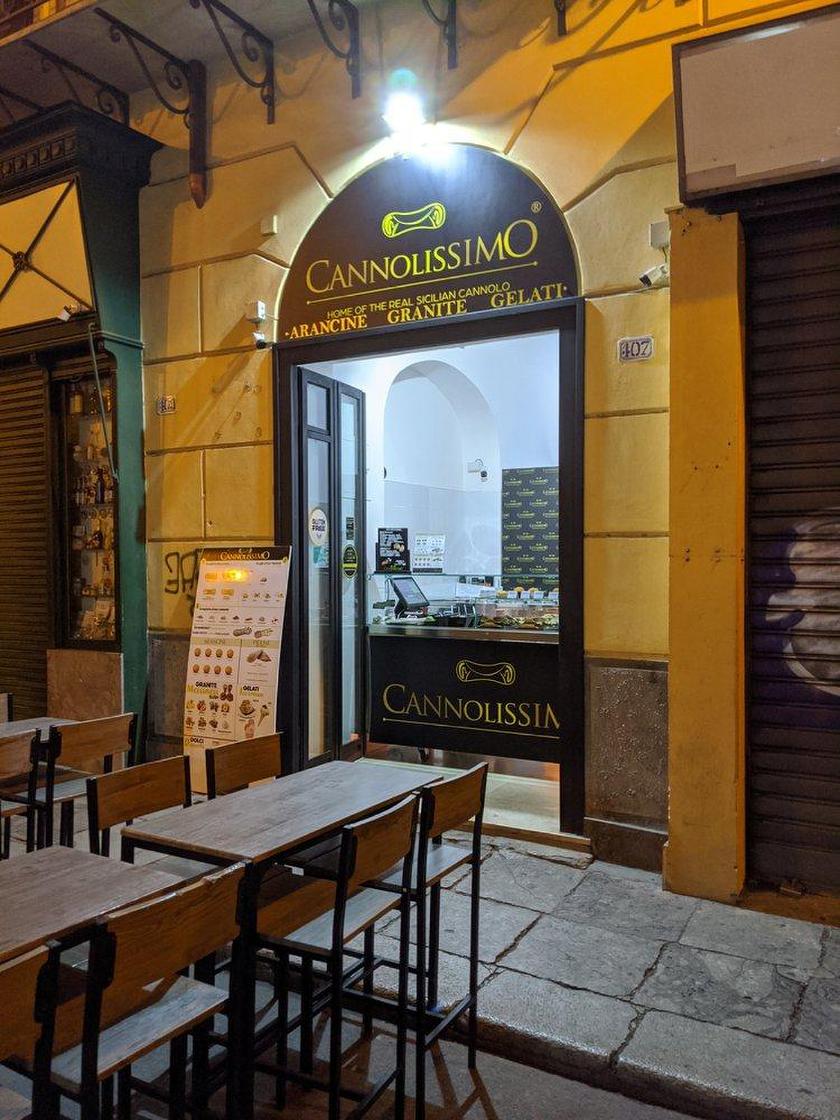 This dessert is sweet Sicilian pastries. They are tube-shaped shells of fried pastry dough stuffed with sweet ricotta cream. Cannoli was invented as a Carnevale treat and was considered a fertile symbol. The largest cannolo was cooked in 2014 and weighed 119.069 kg.

Next on the list of Italian pastries that one must try in Palermo are the cannolis. They are tube-shaped shells of fried pastry dough filled with something sweet and creamy. Sicilians usually add ricotta, and this variation is the one and only true recipe for Sicilian cannolis. These delicious little things are about a thousand years old as a dish, which is pretty natural for a place like Sicily. Legend says that cannolis were invented by royal concubines to avoid the bother of heavy meals during their time with young princes. Nevertheless, today, cannolis are enjoyed by people of all classes.

Cannolis are very easy to find in Palermo. There are even places like Cannolissimo to make the search easier. 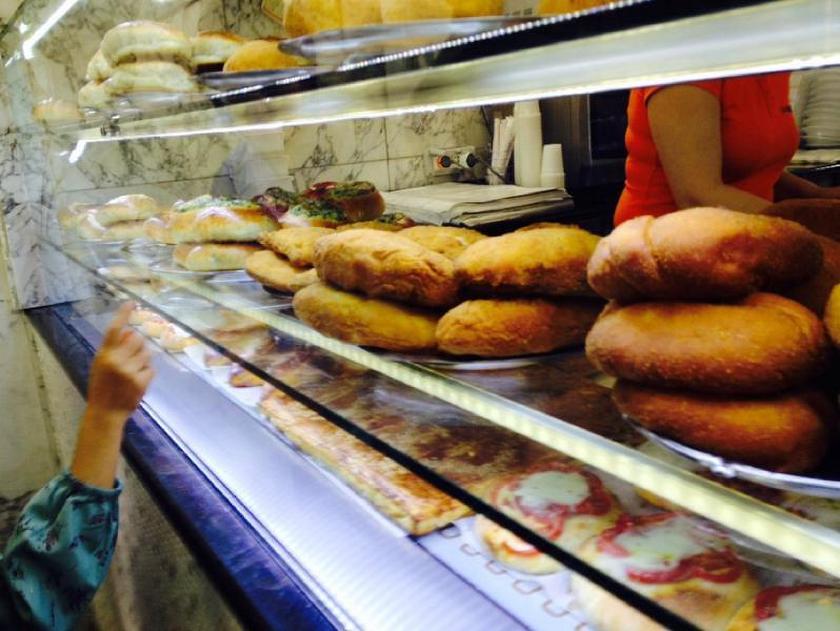 This dish is a popular Italian oven-baked inside-out pizza. Calzones are made from pizza dough, folded into a half-moon shape and filled with mozzarella and ricotta cheese, vegetables, ham, salami or meat. They were invented in Naples in the 18th century and literally mean 'trousers' or 'stockings'.

Eating in Italy and not trying local pizza should be considered a crime. naturally, Palermo offers something unique even when it comes to pizza. Would you like to try pizza pies? The turnover calzones are quite amusing, actually. A calzone is made from salted bread dough baked in an oven and stuffed with salami, ham or vegetables, mozzarella, ricotta, and Parmesan or pecorino cheese. The thing is that calzones are oven-baked turnovers rather than fried pizzas usually associated with the word and this kind of combination in Italian cuisine. So, calzones are basically pizzas inside out. Even their looks make calzones stand out because they are always folded into a crescent shape.

A good option for calzones in Palermo would be La Romanella. 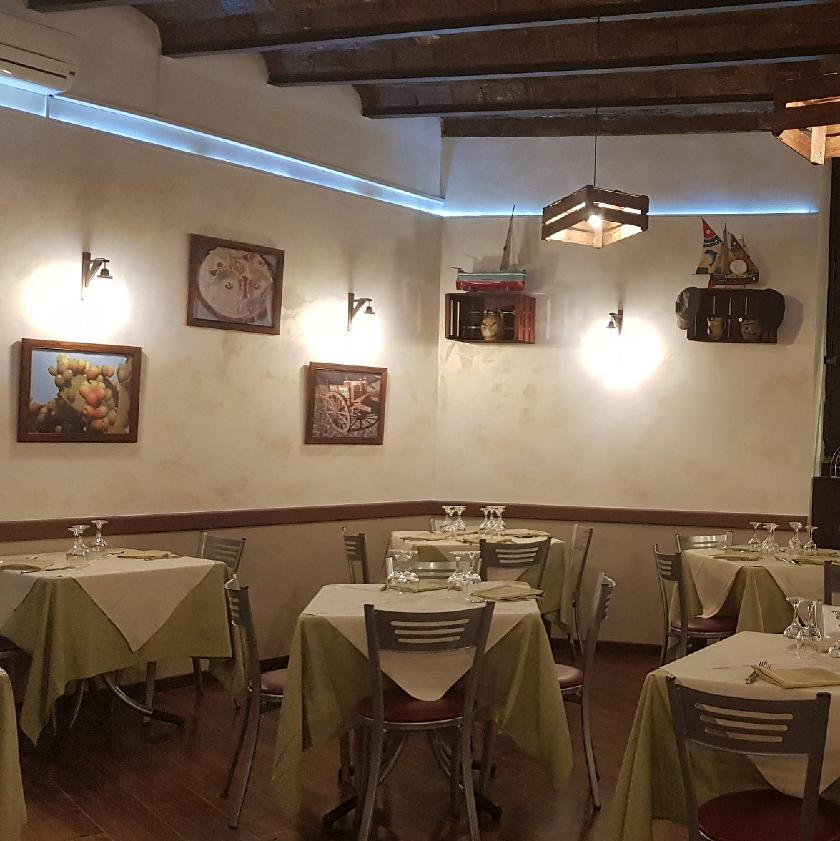 This dish dates back to the 14th century Venus and means 'to wrap'. It's a type of dumplings and it's pasta in the form of small dough cases with a savory filling - meat, cheese or vegetables. Ravioli are usually served with broth or sauce.

Now we're getting serious. "Ravioli" is the name many people who are into good food will recognize. Originating from a fourteenth-century recipe, ravioli are a type of pasta comprising a filling enveloped in thin pasta dough. This dish usually looks like a soup or a broth with sauce but packs a lot more punch in terms of solidity. Despite being Italian, ravioli spread all across the known world, from Cyprus to Côte d'Azur. The dish is exquisite, relatively simple, and does the job when it comes to getting full. So eat it only if you'd like something serious for dinner. 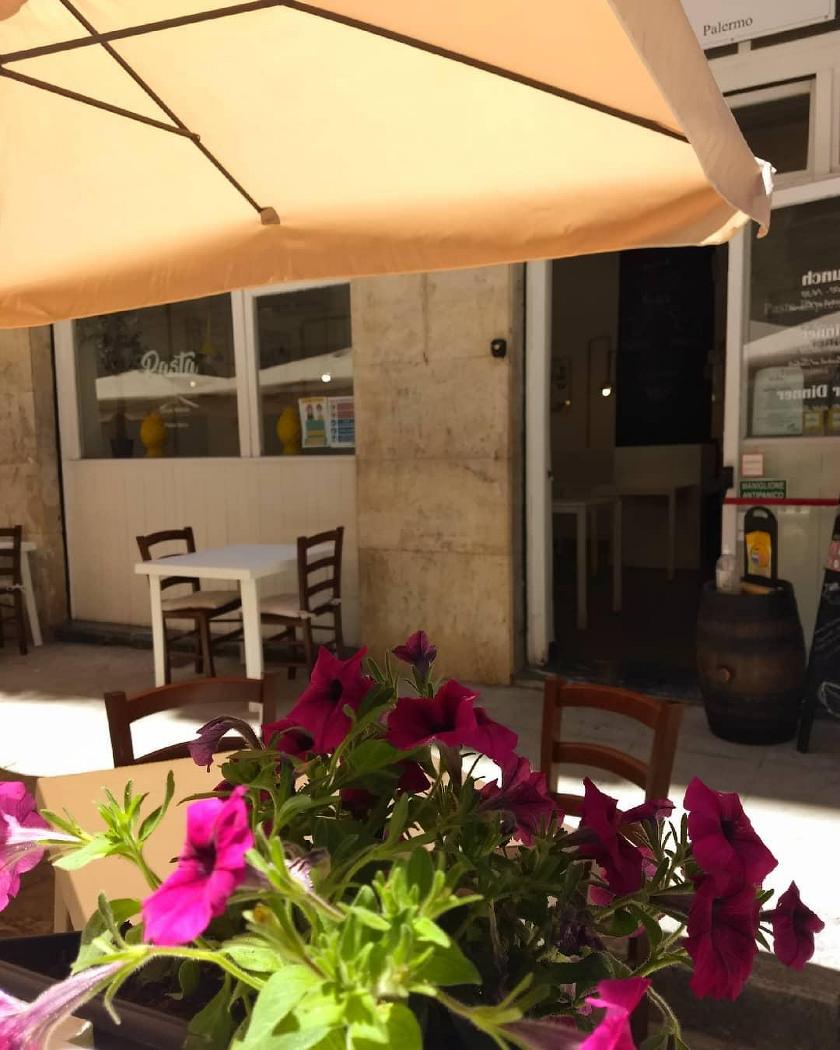 It's a classic Italian pasta made of spaghetti or other long pasta, guanciale or pancetta, parmesan, olive oil, salt and pepper. Carbonara means 'in the manner of coal miners'. There are different theories for its origin. The dish could be the main meal for charcoal workers or just the black pepper flecks look like coal dust against the creamy pasta.

Sicily prides itself on being subsistent in everything, but no one can deny that spaghetti is the one thing from Rome every Italian, no matter how locally proud, will enjoy and accept. The classic variation is spaghetti carbonara. The carbonara pasta is made with eggs, hard cheese, cured pork, and black pepper. It used to be quite different and only became normalized and adopted for home and restaurant cooking in the middle of the twentieth century. The "carbonara" part woes its name to a theory that the dish was invented by coal workers. Guanciale is the most commonly used spaghetti carbonara meat.

Different options for spaghetti carbonara can be found at La Pasteria. 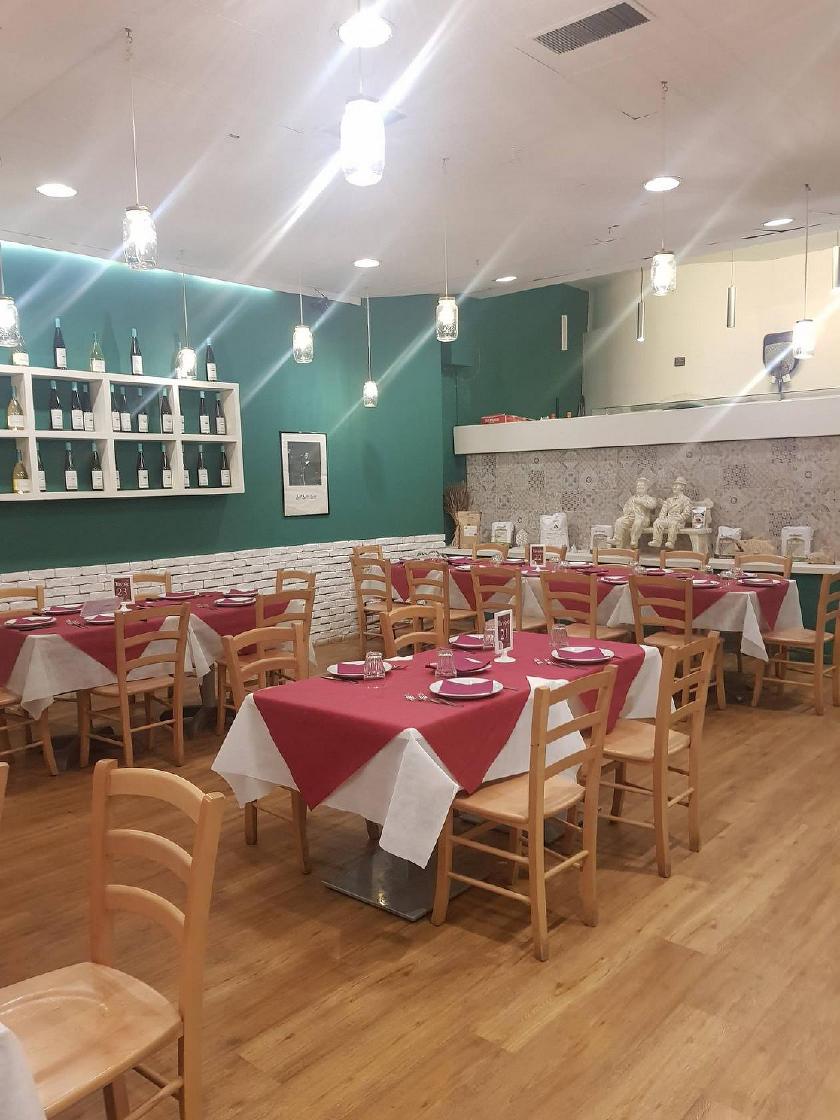 Try this sweet delicate ham that is made of dry-cured hind legs of pigs. Eat prosciutto raw or add it to pasta or risotto. The recipes of Italian prosciuttos differ in various regions. The most famous is Parma ham, or Prosciutto di Parma, that is salted and air-dried for 8-24 months.

Now we're getting to the meat of the issue! Prosciutto is an Italian dry-cured ham usually served as an antipasto, wrapped around grissini or accompanied with melon or figs. It's made from either a pig's or a wild boar's hind leg or thigh, then served in sandwiches and panini, sometimes in a variation on the Caprese salad, with basil, tomato, and fresh mozzarella. The main difficulty with prosciutto is the fact that it has to be prepared for months before serving. On the other hand, there's no need to cook it immediately before, so prosciutto is a great alternative to sausage.

Since you should probably order something with prosciutto, visit restaurants and cafes like Arte e Tradizione to have options. 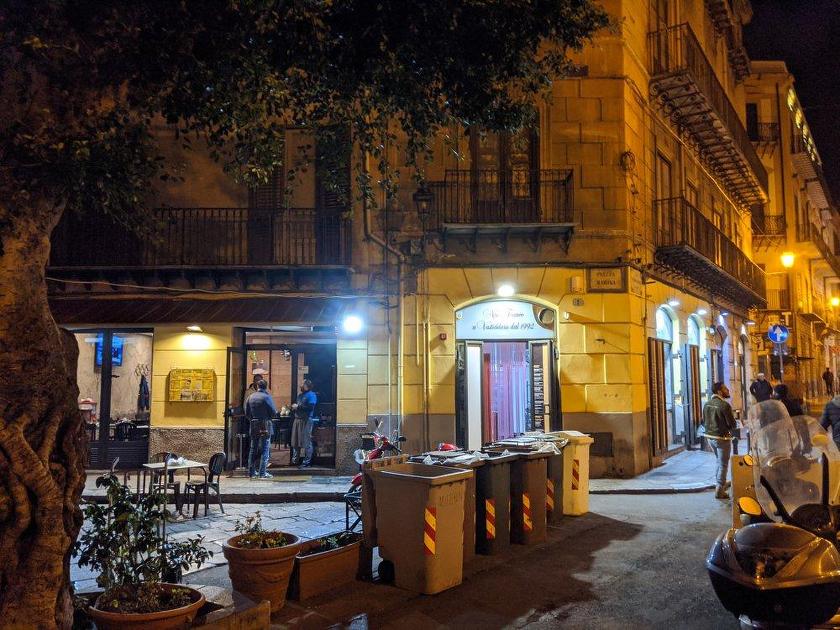 It's a well-known Italian starter consisting of small slices of lightly fried or toasted garlic bread and a variety of toppings. Crostini can be slathered with olive oil and topped with tomatoes, fresh basil, tangy cheese or meat. This appetizer is usually served with soups.

Speaking of ordering things to accompany the main course, one can never go wrong with dry Italian appetizers. Crostini, or "little crusts", consist of small slices of grilled or toasted bread with toppings comprised of different cheeses, meats, vegetables, and condiments. As basic as you can get, the dish was invented by Italian peasants of old and boasts a gritty vitality of an everyman's food. Sometimes olive oil is added to give the old-fashioned and simplistic feel to the recipe.

Crostini can be found pretty much anywhere, so try picking a place with lots of things to combine it with, like Nni Franco U' Vastiddaru. 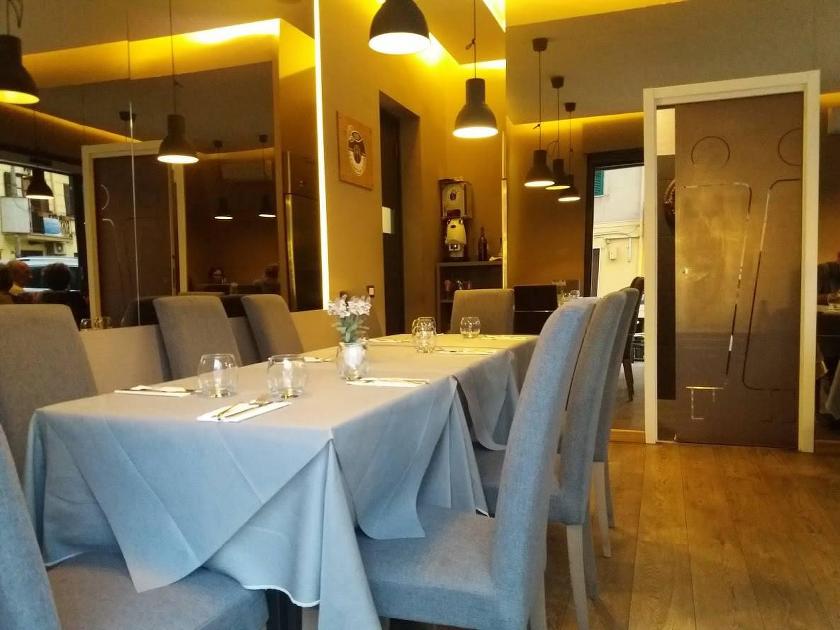 Modern pizza was born in Naples, Italy, in 1889 when its precursor focaccia, a flatbread, was topped with tomatoes, mozarella and basil. The first pizza was cooked for Queen Margherita on her visit to Naples. The world's largest pizza was prepared in Rome in 2012. It was 13,580.28 square feet! By the way, it was gluten-free.

Of course, recommending pizza is almost lazy when we're talking about Italy, but trust me on this - you won't find another pizza like the one made in Sicily. Indeed, different parts of the island have their own recipes, and Palermo probably has places where each of those can be found. The "sfincione" pizza is something every visitor who steps foot in Palermo should try, and even if this particular variation is not the most enjoyable, there are many other smaller options to satisfy someone curious about the Sicilian ways of making something so widely known. The easiest way to distinguish Sicilian pizza is by looking at it. as it's rectangular, with more dough, sauce, and cheese.

Palermo holds many mysteries and places of interest to anyone willing to enrich their cultural and gastronomical knowledge. Have fun exploring it at your leisure.

Comments on Top 10 dishes to die for in Palermo, Italy

Add your comment on
Top 10 dishes to die for in Palermo, Italy
Previous
Next

The 10 food passions in Florence, Italy

10 exceptional Italian dishes you should try in Turin

10 popular Italian dishes and drinks you must try in Naples

10 traditional Italian dishes: eat like a local in Milan
See all