What to try in Marbella: 10 outstanding Spanish dishes

Marbella, Southern Spain, is a vital part of the Costa del Sol (Coast of the Sun), it is located between Malaga, Andalusia, and the Straits of Gibraltar, and it is a worldwide famous resort lying at the Mediterranean Sea. The town was established by Roman colonists about 1600 BC and it was called Salduba (Salt City). The town was renamed Marbella that is a combination of two words mar (a lot of water) and billa (mountain).

Historically, Marbella was a little fishing village, then grew to a mining and agricultural town, however, everything changed after the Spanish Civil War in 1936-1939 when the noblemen, the descendants of highly respectable aristocratic families, started designing and building the largest leisure complexes and luxurious hotels. Marbella became an international jet set and was unavailable for ordinary people.

Nowadays, Marbella boasts 27 kilometers of coastline, 8 beaches have blue-flag status (the gold standard of clean beaches meeting a number of strict requirements), and it's an ideal place for golf lovers (there are 17 golf courses). There are the most expensive properties in the whole of Spain, the oldest villa La Villa Romana featuring the greatest mosaics is almost 2000 years old, and it's an international town (people of 137 various nationalities live here). Here you can visit the open-air museum of Salvador Dali, enjoy incredible nature and degust exceptional Spanish dishes. Here are 6 Michelin Star restaurants! Check out the guide and read about the best restaurants to try delicious traditional dishes in Marbella. 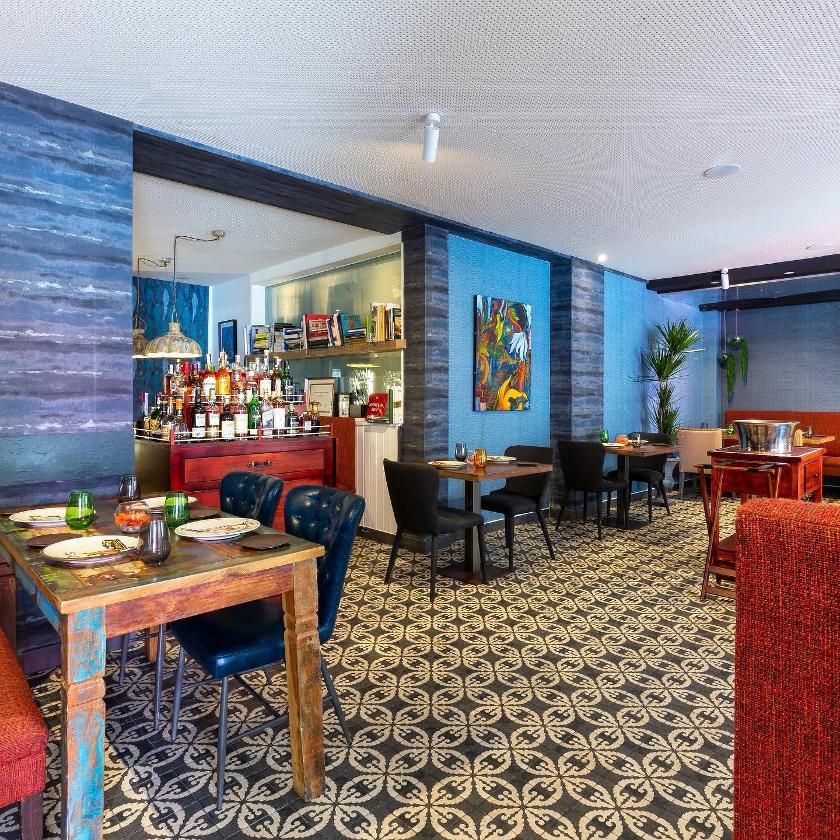 Gazpacho is a cold soup from grinded or chopped raw vegetables, especially tomatoes. In addition, it includes olive oil and garlic, cucumbers, sweet peppers, onion, vinegar or lemon juice, salt. Spices and bread can be added.

This dish is an Andalusian specialty, it's cooked from raw blended vegetables, including tomatoes, garlic, peppers, cucumbers, onions, olive oil, wine vinegar, water, salt, and stable bread. It's an ideal light snack for lunch in spring and summer. You can try different versions of gazpacho at every restaurant at Marbella. Visit the Restaurante Back to degust the best-ever cold soup.

Ensalada malagueña is a traditional Malaga salad cooked from a nice combination of cod, oranges, boiled potatoes, onions, and green olives. The dish is seasoned with salt and dressed with sherry vinegar and olive oil. Enjoy generous portions of this salad, they are really huge in Marbella. 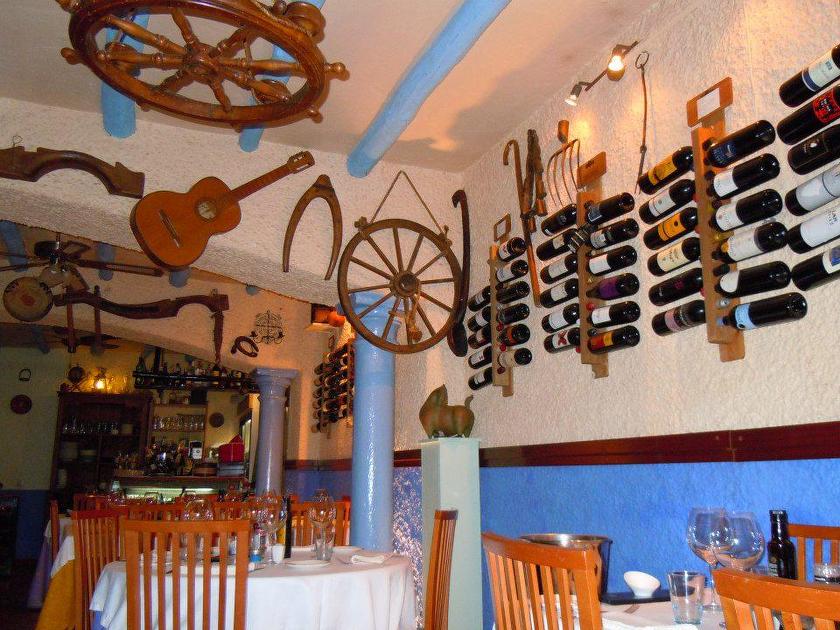 Prawns are delicious, whether stir fried, tossed through pasta, cooked in spicy curry, or placed in salads. Prawns can be served on their own, as a side dish, an appetizer or a snack.

The recipe of gambas al pil pil, or spicy garlic prawns in the pil-pil sauce, traces back to the 19th century. Raw prawns are fried in pil pil sauce, Pimentón de la Vera sauce, which is made with chili, garlic, paprika, and extra virgin olive oil. The dish is served hot in a cazuela, a special clay pot. Lemon wedges and rustic bread are an ideal accompaniment. El Cortijo is a great choice to eat authentic gambas al pil pil and enjoy its marvelous atmosphere. 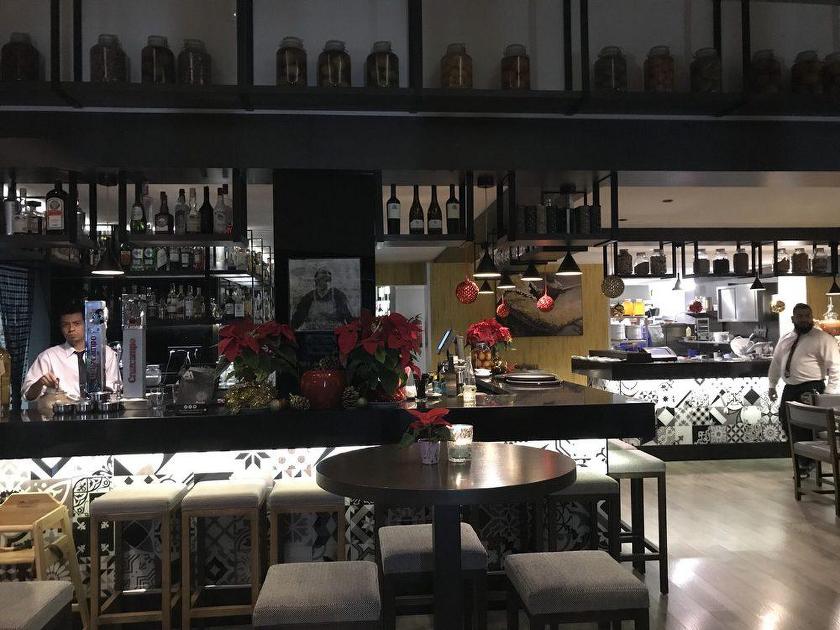 Croquettes, especially stuffed with jamon, are often served at tapas bars. The dough is mainly made with stuffing (jamon, ham, seafood) and with the béchamel sauce.

Croquettes, or croquetas, are common Spanish food, it's so creamy and delicious. Originally, this dish was a meal for poor people as it was cooked from leftovers of serrano ham and simple sauce. Nowadays, they are small fried rolls stuffed with ham, seafood, fish, or chicken. Croquettes come with outstanding thick bechamel sauce made with butter, milk, olive oil, and flour. Paella's y más serves the most superb croquettes in Marbella. 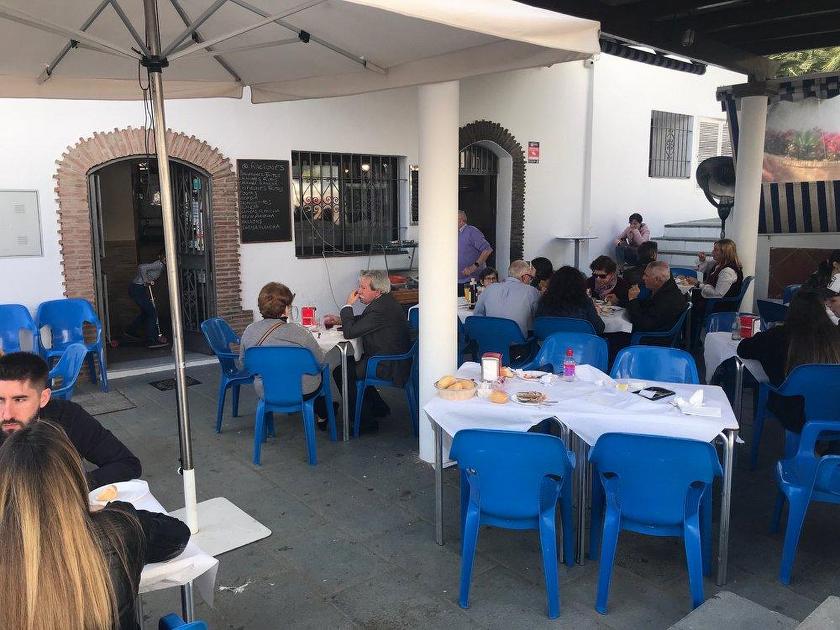 Anchovies are distinguished by a rich, umami flavor. They can be cooked in different ways, namely fried, simmered, roasted, salted, boiled, or canned.

It's an extremely popular food in Andalusia. Boquerones, or anchovies, are served as appetizers or tapas. This small fish has a pungent salty flavor, it is traditionally marinated in garlic, vinegar, and olive oil. You can try it as a cold snack or batter-fried and hot. It usually goes with fresh lemon or lime and it's perfectly accompanied by ice-cold caña, or small beer. Go to the El Cordobes and enjoy fresh and delicious anchovies.

Espetos de sardinas of Costa del Sol is a very typical dish of Marbella. These sardine skewers are Malaga's specialty, it even has a monument. Up to 6 sardines on wooden spits are grilled over an open wood fire. The wooden sticks are then planted in the sand next to the charcoals. Sardine skewers are so smoky and crispy! 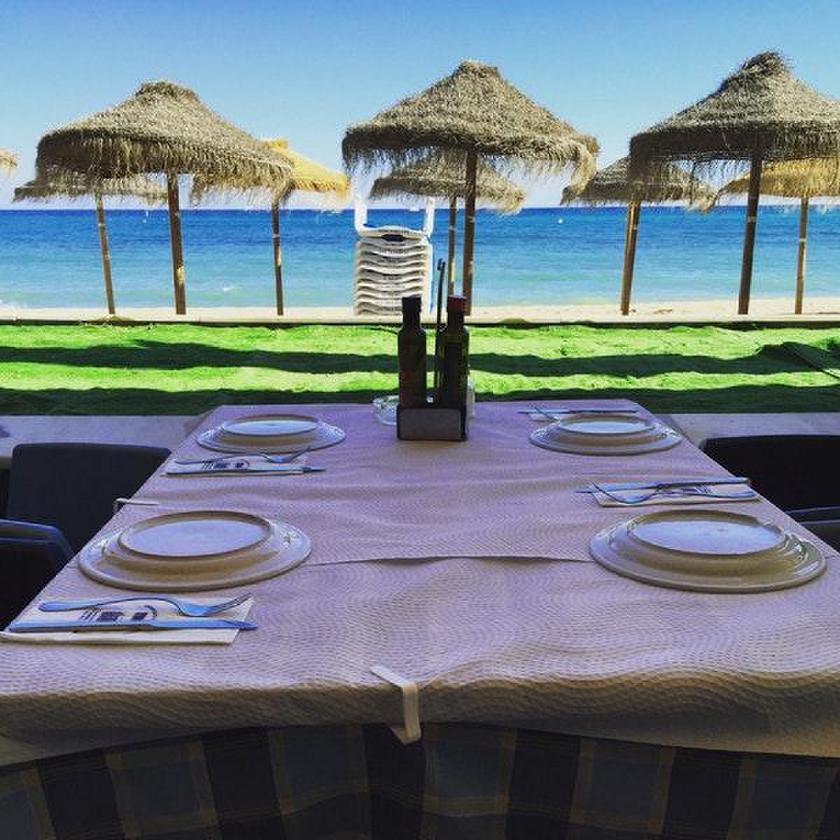 Fried fish gets a tender golden crust and has juicy flesh inside. To prepare this dish one can use sea bass, flounder, cod, haddock, pollock, tautog, and other types of fish.

It's a must to try pescaito frito, or fried fish, during your stay in Marbella. The freshest fish is coated in batter and deep-fried in olive oil. It is sprinkled only with salt and comes with several wedges of lemon. Eat it hot as an appetizer with beer or wine or enjoy it with salad as a main course. Los Tres Pepes is located on the beach and grills fish for you just in front of you on the sand. 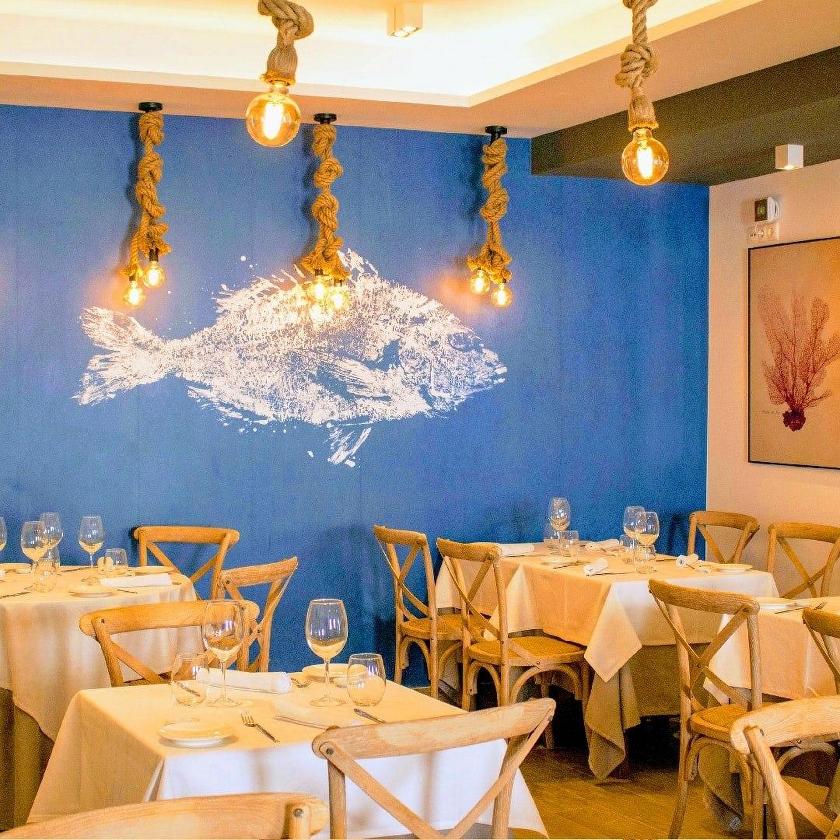 Ajoblanco is cold soup that contains four main ingredients: water, oil, garlic and bread and sometimes vinegar or almonds. Usually served with grapes or slices of melon. The annual Akhoblanko Festival is hold on September 2 in the city of Almachar, Malaga.

Ajoblanco is another cold soup you should try in Marbella. The dish was introduced during the Moorish rule and then it was heavily influenced by Roman cuisine. Ajoblanco is sometimes considered white gazpacho and it's an ideal option to survive the heat of July and August. This cold soup is made with green apples, milk, cubes of white bread, green grapes, blanched almonds, garlic, black pepper, salt, and wine vinegar. You'll find very tasty ajoblanco and other incredible dishes at the Casa Eladio restaurant, that is Michelin selection, simple standard. 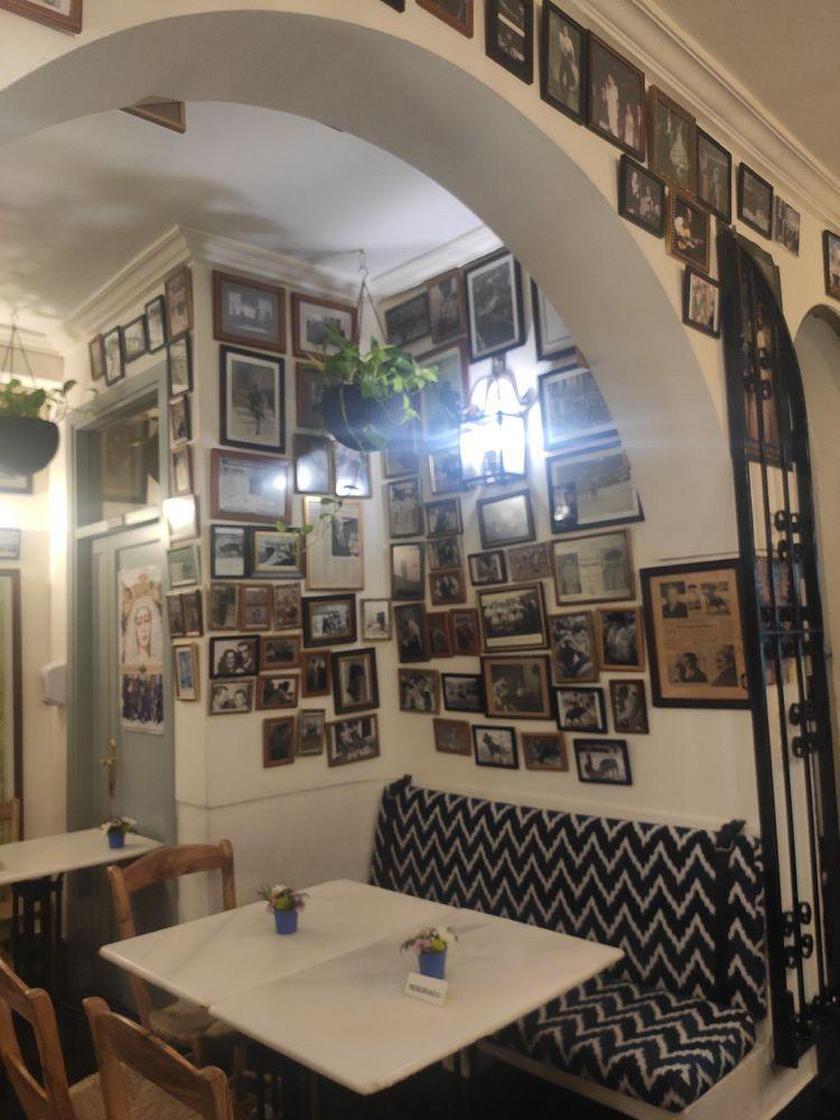 Salmorejo is a chilled tomato soup that is similar to gazpacho, but thicker and creamier. It is made of skinned tomatoes, extra virgin olive oil and garlic and is traditionally served with hard boiled eggs and cured ham.

This cold soup also originated in Andalusia. Salmorejo is also known as Porra Antequerana and ardoria (ardorio). It is cooked with skinned and pureed tomatoes, stale bread, garlic, and extra virgin olive oil. Salmorejo is usually garnished with serano ham and hardboiled eggs. The soup is pink-orange and is thicker and creamier than gazpacho. It's so healthy and tasty. La Niña Del Pisto offers its guests exceptional salmorejo.

10. Fritura malagueña, or an outstanding mix of fried seafood 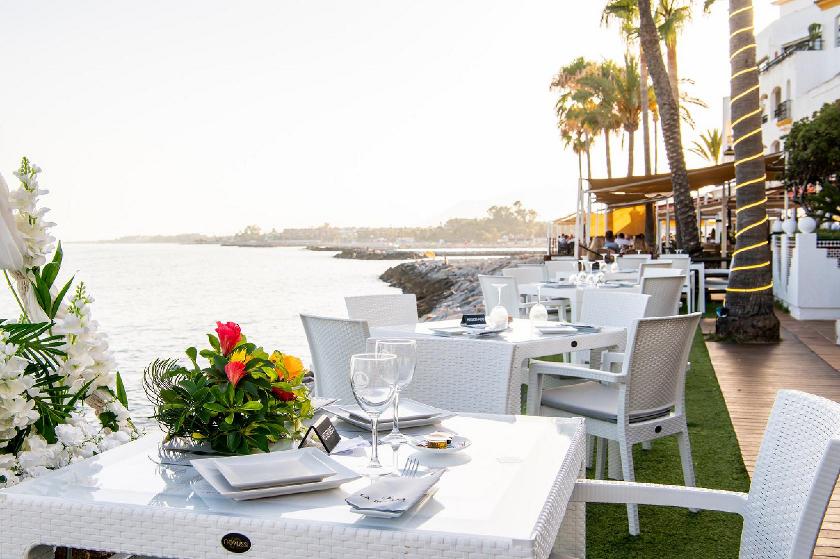 Fried seafood is a very popular dish in various countries. The dish consists of shellfish like lobsters, mussels, and crabs, or other sea creatures prepared by frying. Often the fish and shellfish is fried in batter, egg and breadcrumbs, flour, or herbs and spices.

Fritura malagueña is a huge platter of fried seafood. It's a nice combination of squid, shellfish, and local fishes, including sardines, cuttlefish, red mullet, monkfish, mackerel, small hake, and Norwegian haddock. All this seafood is fried in a salty batter and sprinkled with lemon juice. Fritura malagueña is accompanied by a salad of roasted peppers and a glass of refreshing cold beer. Visit the La Bocana restaurant and enjoy delicious fried seafood and a magnificent view.

Have a rest, enjoy the beaches of Marbella and have a nice meal!

Comments on What to try in Marbella: 10 outstanding Spanish dishes

Add your comment on
What to try in Marbella: 10 outstanding Spanish dishes
Previous
Next